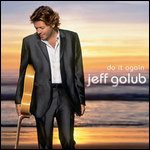 Jeff Golub is a contemporary jazz guitarist with 11 solo albums and 3 CD's as the leader of the instrumental band "Avenue Blue". Before becoming an instrumentalist, Golub worked as a sideman to a number of very successful rock and pop artists.[1]

He's arguably best known for his work with Rod Stewart, whom he played with from 1988 until 1995 performing on 4 albums and 5 world tours as well as recording the live DVD "One Night Only" live at Royal Albert Hall.

Born in Copley, Ohio, outside of Akron, Jeff started playing by emulating 60's blues rock guitarists Eric Clapton, Jeff Beck, Jimi Hendrix, etc...Then, following up on the artists that these musicians cited as their inspiration, he delved deeper into the blues listening to Muddy Waters, Buddy Guy, and anyone named King --B.B., Albert, and Freddie.

Golub was in his teens when he first heard a Wes Montgomery record. This moment set him on a whole new course which led him to study at Berklee College of Music in Boston. While in Boston he played in The James Montgomery Band. From Boston Jeff moved to New York in 1980 where his first major gig was with rocker Billy Squier. Jeff appeared on 7 albums and 3 world tours with Billy. He released his first solo recording, "Unspoken Words" for Gaia Records in 1988 but really embraced his role as band leader and instrumentalist with the release of "Avenue Blue" in 1994 for Mesa Bluemoon/Atlantic records.

Golub was a member of Dave Koz & The Kozmos, the house band of The Emeril Lagasse Show.[2]

In June 2011, Golub became blind due to collapse of the optic nerve.[3]

In September 2012, Golub fell on the tracks of a subway and was dragged by the train before being saved by Good Samaritans. Golub was brought to New York-Presbyterian Hospital/Weill Cornell Medical Center with minor injuries.[4]

This article uses material from the article Jeff Golub from the free encyclopedia Wikipedia and it is licensed under the GNU Free Documentation License.

Better Man Pegasus
Update Required To play the media you will need to either update your browser to a recent version or update your Flash plugin.