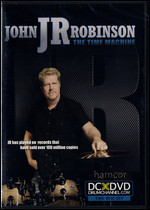 John Robinson (born December 29, 1954, Creston, Iowa,[1] also known as John "JR" Robinson or John "J.R." Robinson) is an American drummer and session musician. He is most known for his work with Quincy Jones, including Michael Jackson's multiplatinum Off the Wall album and the charity single "We Are the World".

Robinson is a prolific studio drummer, having played for other popular groups or artists including:

Robinson was inducted into the Iowa Rock 'n Roll Music Association Hall of Fame in 2005. The group said Robinson is "the most recorded drummer in history, even surpassing the great Hal Blaine."

Robinson has played on dozens of film soundtracks including My Cousin Vinny, Jerry Maguire, The Bodyguard, Independence Day, Space Jam and That Thing You Do.

This article uses material from the article John Robinson (drummer) from the free encyclopedia Wikipedia and it is licensed under the GNU Free Documentation License.