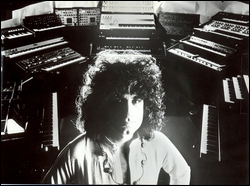 Patrick Philippe Moraz (born 24 June 1948, Villars-Ste-Croix, Morges, Switzerland) is a progressive rock keyboard player. He is best known as the keyboardist for the progressive rock band Yes, from 1974 to 1976, and The Moody Blues from 1978 to 1990. He was classically trained at the Conservatory of Lausanne, but played jazz primarily before entering progressive rock.

He first toured as a solo performer opening for major jazz artists throughout Europe in the mid-1960s. He then formed the group Mainhorse with Jean Ristori in 1968, which released a self-titled album on Polydor. He then moved to England and in 1973 formed Refugee with Lee Jackson and Brian Davison, both previously of the The Nice.

Moraz rose to prominence in 1974 when he replaced Rick Wakeman in Yes, playing on their album Relayer and world tour. Moraz also played with Refugee on the self titled album in 1974. Although Vangelis was the first candidate to join the band, he was finally discarded in favour of Moraz, because of legal issues related to work permits in the United Kingdom. On the Relayer album, Moraz brought in a more jazz/fusion sound that was a departure from Yes' more classical approach. In 1975-76, all then-members of Yes released solo albums, including the Moraz album, titled Story of I (1976). Additionally he played on one track of Chris Squire's solo album Fish Out of Water (1975). In the interim, Moraz had moved to Brazil, and incorporated Brazilian rhythms and performers on Story of I, making it an important staple of world music. He left Yes in 1976 prior to the formal start of recording their next album Going For The One (1977). Moraz then recorded his second album, Out in the Sun.

Moraz began touring with The Moody Blues on their Octave tour in 1978, replacing their former keyboardist Mike Pinder. He subsequently played on their 1981 album Long Distance Voyager, which reached #1 on the US charts. He continued touring and recording with the Moody Blues until 1991. During this time, Moraz was also credited as co-writer on the Moody Blues song "The Spirit", along with drummer Graeme Edge, and it appeared on their 1986 album The Other Side of Life.

Even while with the Moody Blues, Moraz toured and recorded extensively. He toured with his group from Brazil, recorded with Chick Corea and released two prominent albums of duets with drummer Bill Bruford, another former member of Yes. His solo albums Future Memories I, Future Memories II and Windows of Time have been critically well received.

In 1992, Moraz left the Moody Blues, and subsequently sued them for royalties he felt were owed to him as a member of the band for nearly 15 years. The Moody Blues denied that he was a member of the band, but rather a hired musician, despite the fact that his name was listed with the band members on the original record sleeves and booklets. The case went to court in California and was shown on Court TV. Although Moraz won a judgment, it was for a minor amount rather than the millions that the suit claimed.

Since then, Moraz has primarily concentrated on solo works, particularly solo piano. In 1995, Moraz performed throughout the USA on his C.H.A.T. tour (Coming Home to America). The tour was unusual in that Moraz booked everything himself, and for a flat fee of $800 would come to private homes, clubs or other venues, and play private or semi-private solo piano concerts. Moraz played for anywhere from 2 to 100 people at these shows, one of which was recorded and released as PM In Princeton, on both CD and video. Other solo piano recordings from this period include Windows of Time (1994) and ESP (2003), as well as a solo piano album titled Resonance (2000).

He now lives on the west coast of Florida with his wife.

In April 2014, Moraz took part in the "Cruise to the Edge" progressive rock festival as a solo artist.

This article uses material from the article Patrick Moraz from the free encyclopedia Wikipedia and it is licensed under the GNU Free Documentation License.

Morning Sun Ad-Rian
Update Required To play the media you will need to either update your browser to a recent version or update your Flash plugin.