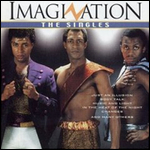 Errol Kennedy was at a very young age when he learned how to play drums. Before co-founding the British three piece soul, pop and funk band Imagination with Ashley Ingram and Leee John in London, in early 1981, he was a member in two other soul-funk bands: Midnight Express and TFB (Typical Funk Band).

Imagination's first UK hit single, "Body Talk", produced by Jolley & Swain, spent 18 weeks in the UK Singles Chart and reached number 4 in May 1981. This was quickly followed by two other chart topping singles, "In and Out of Love" and "Flashback", both co-written by Kennedy. Their biggest hit, "Just an Illusion", peaked at number two in March 1982. The trio frequently appeared on Top of the Pops and other pop music programmes. Over the years, Errol Kennedy became known as "The man with the groove of the band".

After the breakup of Imagination, Kennedys success continued both as a musician and producer. He worked with Hugh Masekela at Bray Film Studios to produce the soundtrack for the movie Soweto, and during the 1990s either toured or produced with bands such as Odyssey, Shalamar, Rose Royce, Grace Kennedy, Jamiroquai, Frankie Knuckles, Larry Levan, Arthur Baker, Colonel Abrams and Simon Ellis.

Since 2009, Kennedy has been performing again live on stage with his band ImagiNation feat. Errol Kennedy. They toured the UK in 2010-2011 which was a huge success, followed by a special guest performance at London's IndigO2 alongside the Three Degrees and Linda Lewis, as well as various events and festivals across Germany in 2012.

On February 23, 2013, ImagiNation feat. Errol Kennedy announced via the official ImagiNation fan page that a new release was soon to come.

Celebrating Imagination's 30th anniversary, on May 5, 2013, Kennedy released Imagination's official anniversary single "Just An Illusion" (featuring T'Mar) on M&R Records, which is a re-production of what had become Imagination's biggest hit. Kennedy had also announced that the single was taken from the forthcoming anniversary album, New Dimension, to be released later in the year. With this new single, Kennedy is also supporting the UK based charity, Breakthrough Breast Cancer.

This article uses material from the article Errol Kennedy from the free encyclopedia Wikipedia and it is licensed under the GNU Free Documentation License.

He Ain't Heavy, He's My Brother Gotthard
Update Required To play the media you will need to either update your browser to a recent version or update your Flash plugin.