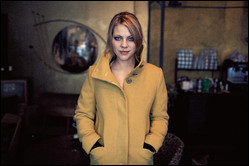 Jaël, (aka Jaël Malli;[1] born Rahel Krebs; 19 August 1979 in Bern, Switzerland), is a Swiss singer-songwriter from the band Lunik. She worked several times with Delerium, co-writing, and singing "After All" on their album Chimera, "Lost and Found" on their album Nuages du Monde, and "Light Your Light" on their 2012 album Music Box Opera. She is both internationally famous in the Trance music community as well as domestically famous from her work in Lunik. The origin of her pseudonym is that she had trouble pronouncing her real name correctly as a child.

Jaël also featured on DJ Tatana's 2004 single "Always On My Mind", which had moderate chart success in Switzerland upon its release. She can also be heard in two tracks ("You Remain" and "Stop Crying") on Mich Gerber's 2004 album Tales Of The Wind and on the 2008 release Sehnsucht from Schiller on the track "Tired".

This article uses material from the article Jaël from the free encyclopedia Wikipedia and it is licensed under the GNU Free Documentation License.

Rosie Joan Armatrading
Update Required To play the media you will need to either update your browser to a recent version or update your Flash plugin.