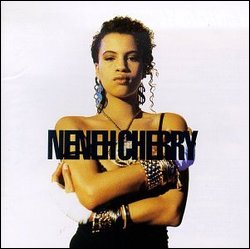 To date, Cherry has released four studio albums. Her first, Raw Like Sushi was released 1989 and peaked at number three on the UK Album Chart, thanks in large part to the worldwide hit single "Buffalo Stance". Her second studio album was 1992's Homebrew. Four years later she released Man, and then released her most recent studio album Blank Project in 2014.

In addition to releasing these studio albums, she formed the band cirKus in 2006 and has collaborated with The Thing, releasing an album entitled The Cherry Thing in 2012. She also performed in a number of punk and post-punk bands in her youth, including The Slits and Rip Rig + Panic.

Cherry was born as Neneh Mariann Karlsson in Stockholm, the daughter of Monica "Moki" Karlsson, a Swedish painter and textile artist, and the musician Ahmadu Jah. Jah was born in Sierra Leone, the son of a chief, and went to Stockholm to study engineering at university.[5]

Cherry's parents, Moki and Don Cherry, bought and converted an old schoolhouse in the countryside outside the small town of Hässleholm in Sweden in 1970.[6] In the early 1970s, the family moved to the United States, when Don Cherry taught at Dartmouth College.[7] Cherry dropped out of school at 14 and moved to London.[8]

Cherry has stated that she found her voice singing along with Poly Styrene from X-Ray Spex. She grew up in a musical family; she remembers singing with her father at the piano.[9]

Cherry moved to the United Kingdom when she was 14, in the midst of the punk era, and she remembers finding "her people" there. Cherry had met Tessa Pollitt, Viv Albertine and Ari Up from The Slits earlier as her stepfather, Don Cherry, was touring with them and brought the 15-year-old Neneh along.[10] She and Ari lived in a squat in Battersea. She felt at home, after ending up there because The Slits invited Don Cherry to go on tour with them with Prince Hammer and Creation Rebel.[6]

She began a solo career in 1982 with "Stop the War", a protest song about the Falklands War. She worked with Jonny Dollar, The The and Cameron McVey (a.k.a. Booga Bear), who co-wrote most of her 1989 debut album Raw Like Sushi, and whom she would eventually marry.[3] She was intimately involved in the Bristol urban culture scene, working as an arranger on Massive Attack's Blue Lines album, through which she met Dollar. Both Robert Del Naja and Andrew Vowles of Massive Attack contributed to Raw Like Sushi.

The single "Buffalo Stance" eventually peaked at number 3 in the UK Singles Chart and the US Billboard Hot 100,[3] and number 1 on the US Dance chart. More singles released between 1988 and 1990 included "Manchild," "Kisses on the Wind," "Heart," and "Inna City Mama." She also found success with "I've Got You Under My Skin", a reworking of the Cole Porter song, which appeared on the Red Hot + Blue AIDS fundraising album. The single reached number 25 in the UK.[3] Cherry was nominated for a Grammy Award in 1990 in the Best New Artist Category; she lost out to Milli Vanilli, who later had their Grammy revoked when it was discovered that they had not performed on their recording. She won a Brit Award in 1990 for Raw Like Sushi.

Cherry caused a press furore when she performed "Buffalo Stance" on Top of the Pops while pregnant (with her second child, Tyson).[11]

Cherry's second album was 1992's Homebrew. Homebrew was not as commercially successful as its predecessor.[3] The album had some success on various Billboard charts with songs "Buddy X" and "Trout".

"Buddy X" reached #4 on the Billboard Dance Club Music Charts where it spent a total of 11 weeks. The track also spent some time on Billboard′s Pop Songs Charts as well as The Hot 100 Charts, where it peaked at #22 during its 8-week run and peaked at #43 in its 12-week run, respectively.

The music video for "Buddy X" earned Neneh Cherry an MTV VMA nomination at the ceremony in 1993 for the Best Female Video category, alongside Janet Jackson, Annie Lennox, and k.d. lang, with lang winning the moonman.

"Trout" features additional vocals by R.E.M. singer Michael Stipe who helped to co-write the track along with Cherry, McVeigh, and Jonathan Sharp and contains samples of a guitar riff from Steppenwolf as well as drums by John Bonham. With airplay on College radio and increased popularity, "Trout" spent a total of 14 weeks on Billboard′s Alternative Music Charts where it reached number 2.

Homebrew also included the work of Geoff Barrow (on "Somedays"), who would later become part of Portishead.

Additional recognition was attributed to remixes of track "Buddy X". First was the 1993 remix by The Notorious B.I.G., which is considered by some to be "one of the great Biggie rarities in the world."[13] Cherry stated that she and McVey picked up Biggie for the studio where they remained for the session. The song was completed in one take.[13] "Buddy X" found success yet again in the 1999 remix by Dreem Teem.

"Move With Me" was co-written by Cherry, McVeigh and Lenny Kravitz.[14]

1996's Man is a solo record produced by McVey, Jonny Dollar and Christian Falk. The lead track is "Woman", her take on James Brown's 1966 track "It's a Man's Man's Man's World." It featured the worldwide hit single, "7 Seconds", featuring Youssou N'Dour; and "Trouble Man" a cover of a Marvin Gaye track. "7 Seconds" remained at number 1 in France for a record 16 weeks in 1994.[15] Another track, "Together Now", featured Tricky.

Cherry received her second Grammy nomination in 1994 for "7 Seconds". In the MTV Europe Music Awards in 1994, "7 Seconds" won the Best Song title.

Neneh Chérie Remixes, a remix album of Man songs, was released in 1997.

Blank Project was written by Cherry and her husband McVey.[5] Paul Simm co-wrote six tracks on the record.[16] The record was deeply influenced by the death of her mother.[17]

The Cherry Bear Collective, Cherry's former company with McVey, is now called Nomad Productions and is based in west London.[5]

In 2006, Cherry announced the formation of a new band, cirKus. In addition to Cherry, cirKus members were Cameron McVey, Lolita Moon (Neneh and Cameron's daughter Tyson) plus Karmil. CirKus toured Europe, with a single North American performance at the Montreal Jazz Festival in July 2006 plus a few dates in Brazil in 2008. The band's first album, Laylow, was released in France in 2006. A remixed/recorded version was released in 2007. A second CirKus album, Medicine, was released in France in March 2009.

In March 2011, Cherry collaborated with the experimental jazz group The Thing, to release the record The Cherry Thing.[22] The Thing is a Norwegian/Swedish jazz trio, consisting of Mats Gustafsson (saxophones), Ingebrigt Håker Flaten (double bass), and Paal Nilssen-Love (drums). The Thing took their name from the third track on stepfather Don Cherry's album Where Is Brooklyn?.[6][11] The album The Cherry Thing was released in June 2012 and was recorded at Harder Sound Studios in London, England and Atlantis Studios in Stockholm, Sweden.[23]

During a 1 June 2012 interview with Kirsty Lang, broadcast as part of the BBC Radio 4's Front Row daily podcast, Cherry discussed the jazz-inspired album, saying that The Thing were inspired by Cherry's stepfather's work, but that the band makes this inspiration their own. "I think that we're taking it on, to another place. I think that's really important," Cherry said. One of the songs from the album, "Golden Heart", was written by Don Cherry; Christer Bothén, a musician who played with Don Cherry, was invited to play on the album, and brought the song to their attention.

The album includes tracks originally performed by an eclectic mix of artists, including hip-hop artist MF Doom, Martina Topley-Bird[11] Suicide, and The Stooges'.[6] Most of the tracks were recorded together live.[6]

Although Cherry has only released a handful of albums, she has frequently collaborated with other artists.[24]

In 2013, Cherry collaborated with London duo RocketNumberNine (named after a Sun Ra track), a.k.a. the Page Brothers — Ben and Tom Page — to record an album called MeYouWeYou. She also joined them to perform the entire album live at the Manchester International Festival in July 2013.[25] The record is an album of 10 tracks that Cherry wrote with McVeigh, which they brought with only vocals to RocketNumberNine, who then did their musical interpretation to all the tracks. They recorded the album live in Woodstock, New York, with Vortex. The 10 tracks were recorded in five days. Cherry calls it fearless and hardcore.[26]

Cherry said she has never really thought of herself as a rapper. She sees herself as a "singer that does a bit of rapping."[9]

Breaking into the U.S. music industry was not a positive experience for Cherry. She said that while "Buffalo Stance" gave her a mainstream crossover moment in the U.S. she found the American music industry stiflingly attached to labels and genre identities.[29]

In 1986, Cherry met producer Cameron "Booga Bear" McVey at Heathrow Airport. Cherry and McVey were en route to Japan as fashion models as part of London designer Ray Petri's Buffalo Posse. Cherry proposed, and the two married in 1990.[34] Cherry and McVey had two daughters: Tyson, born in 1989, and Mabel, born in 1996.[30] Cherry and McVey have a collaborative work relationship: McVey produced and co-wrote Raw Like Sushi. Together they have supported a variety of British acts and they were in the group cirKus together. Via McVey's prior relationship with Vonnie Roudette, Cherry has a stepson, Marlon Roudette, who fronted the British duo Mattafix.

The Cherry-McVeys have lived throughout Europe. In 1993, they moved near Málaga, Spain and lived there until 1999. In 1995, they briefly lived in New York City. They bought a home in the Fort Greene section of Brooklyn, New York. Soon after moving in, the couple was held up at gunpoint and robbed by a teenage hoodlum. The entire family packed up again and headed back to London's Primrose Hill.

They next returned to Cherry's childhood home in Hässleholm, Sweden, living in the same schoolhouse turned home (featured in Homebrew album artwork) in which Cherry was raised as a child.

Since the late 1980s, Cherry has frequently worked with the stylist and jewelry designer Judy Blame.[35]

On her street style, Cherry cites LL Cool J as an influence, as well as the photographer Jean-Baptiste Mondino, Judy Blame, and designer Ray Petri.[36][37]

This article uses material from the article Neneh Cherry from the free encyclopedia Wikipedia and it is licensed under the GNU Free Documentation License.

Amanda Boston
Update Required To play the media you will need to either update your browser to a recent version or update your Flash plugin.