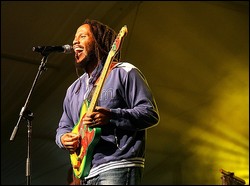 David Nesta "Ziggy" Marley (born 17 October 1968) is a Jamaican musician and leader of the band, Ziggy Marley and the Melody Makers. He is the oldest son of reggae legend Bob Marley.

In 1979, Ziggy and his siblings Cedella, Stephen, and Sharon made their recording debut with their father, "Children Playing in the Streets". The Melody Makers, as the group came to be known, played occasionally for several years, including at their father's funeral in 1981. Their debut LP was Play the Game Right, which was a very pop-oriented album, earning Ziggy some derision from critics. The band's label, EMI, wanted to market Ziggy as a solo act, and so the Melody Makers moved to Virgin Records (which was later acquired by EMI), where they recorded Conscious Party (1988, produced by Chris Frantz and Tina Weymouth). The album was critically and popularly successful, as was One Bright Day (1989) and Jahmekya (1991).

Some of his most popular singles include "True To Myself", "Drive", "People Get Ready", and his hit single "Tomorrow People" from his Conscious Party album, which reached #39 on the Billboard Hot 100.

In April 2011, Marley announced his fourth album, entitled Wild and Free would be released on 14 June. The title track, featuring Woody Harrelson, was available for free with the pre-order of Ziggy's first comic book, "Marijuanaman".

In 2013 his song "I Love You Too" won him a Daytime Emmy Award in the 'Outstanding Original Song Children's and Animation' category, after it was used in the Disney Channel animation 3rd & Bird!.[2]

Ziggy Marley is the eldest son of Bob Marley and Rita Marley. He is married to Orly Agai, an Israeli of Iranian descent,[3] who is a former vice-president of William Morris Agency. He also has 6 children, Justice Marley, Zuri Marley, Judah Victoria, Gideon Robert Nesta, Abraham Selassie Robert Nesta, and Daniel Marley. Daniel "Bambaata" Marley is a reggae and rap artist who appears in Ziggy Marley's song "Changes", and in his own songs. Most of the family resides in Miami.

In 1991, Marley and the Melody Makers contributed the song "Give A Little Love" to the Disney album, For Our Children. The album is a collection of kid-friendly songs by popular artists (e.g. Paul McCartney, Bruce Springsteen, and Elton John), with proceeds given to the Pediatric AIDS Foundation.

Marley made guest appearances as himself on an episode of the sitcom Family Matters in 1995, and on the television series Charmed in season 6 (episode 13, "The Legend of Sleepy Halliwell"), performing "Rainbow in the Sky".

He and his Melody Makers made a guest appearance on the popular kids television show Sesame Street in the 1991-92 season, and sang a Sesame Street version of "Small People" from their 1991 album Jahmekya

In 1996, Marley and the Melody Makers recorded the reggae-style theme song for the children's television series Arthur called "Believe in Yourself".

He voiced Ernie, one of Sykes' (Martin Scorsese) Rasta jellyfish henchmen in the 2004 film Shark Tale. In the film when Oscar (Will Smith) tries to sing the Bob Marley song "Three Little Birds", Marley's character zaps Oscar on the head and says "That's not the way you sing that song, mon." The title song for the film was a cover version of "Three Little Birds" performed by Marley and Sean Paul.

Further voice acting includes "Crockadle" on an episode of My Gym Partner's a Monkey, the Cheshire Cat in a 2010 episode of Wonder Pets, and Reflux the Knaaren, in the Ubisoft video game Rayman 3.

Marley covered "Drive" by The Cars for the Adam Sandler movie 50 First Dates, and his father's song "Three Little Birds" for the Dora The Explorer soundtrack.

Ziggy is listed as the featured artist on Donna Summer's song, "Crayons," the title track from her 2008 album. He has also performed duets with Angelique Kidjo, Sting, Dora The Explorer, Taj Mahal, The Chieftains, Sean Paul and others.

Marley and his daughter Judah made an appearance in the 2009 Macy's Thanksgiving Day Parade.

Ziggy Marley released a pro-marijuana song in support of California's Proposition 19 ballot initiative to legalize recreational marijuana. Voters rejected the ballot but backers said they would mount another legalization campaign in 2012.

He performed in an episode of Sesame Street, playing his well known song "Set Your Piggies Free", which encourages children to take off their shoes and socks and to explore nature with bare feet. The video involves many celebrities with their children, singing along. The main message of the video however is to just "Go Barefoot and Wiggle Those Toes!".

He also appeared on Counting Cars on the History channel. It premiered in June 2013; In the episode, he meets Danny at Vamped to commission a restoration on his father, Bob Marley's, vintage Mercedes.

He also sang with Cody Simpson in his song "love"

This article uses material from the article Ziggy Marley from the free encyclopedia Wikipedia and it is licensed under the GNU Free Documentation License.