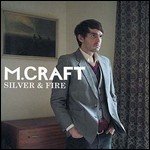 Martin James Ford Craft (b 18 January 1976) is a musician and songwriter who lives and works in London. Craft was a founding member of the Australian rock band Sidewinder. When they split up he relocated to London where he followed a career as a solo artist under the name M.Craft. He has also spent several years playing rhythm guitar with Jarvis Cocker.

Craft was born in Canberra but grew up in the UK as his father, Hugh Craft, worked for the Department of Foreign Affairs. The family returned to Canberra in 1988. Craft formed the rock band Sidewinder whilst still in school. After graduating, he studied piano and composition at the Canberra School of Music for several years, dropping out and moving to Sydney when Sidewinder were offered a record deal with Half a Cow Records.[1]

Sidewinder were formed in 1991 by Martin with his brother Nick Craft, and guitarist Pip Branson, who were joined several years later by drummer Shane Melder. They soon came to the attention of Nic Dalton, bass player for The Lemonheads and owner of Half a Cow Records. When signed Craft was still sixteen years of age so his contract had to be countersigned by his parents.

Drawing their influences from the sixties psychedelia, garage rock and nineties shoegazing scenes, Sidewinder became a prominent "indie" band, known particularly for their live performances which incorporated film projections and psychedelic light shows. They released three EPs: TStar (1991), Yoko Icepick (1992) and The Gentle Art of Spoonbending (1994), and the album Atlantis (1995),but it was their final album Tangerine (1997) that saw the band achieve their greatest successes both commercially and artistically. In 1997 they also were the support act for the Australian leg of U2's Popmart tour. After parting with Universal Records a third album stalled in mid-recording and they disbanded in 1999.

Craft had begun work on a solo project while Sidewinder were still active, when he started working with J.Walker of Machine Translations in 1999. He moved to London and was signed to the London label 679 Recordings, where he began releasing records again under the name M.Craft.

He has tended to play most of the instruments on his own records and has most often acted as his own engineer and producer. His influences are diverse. Whilst many of his songs incorporate folk-style fingerpicking, others draw their inspiration from dance-influenced pop, Latin rhythms and sixties artists such as the Velvet Underground.

He has been compared to widely disparate artists, most frequently Neil Young, Elliott Smith and Serge Gainsbourg.[2][3]

The mini-album I Can See It All Tonight (2004) saw Craft begin to be given critical acclaim in the press.[4] Craft began work on an album, much of which was recorded in home studios around Dalston, where Craft has lived for many years. A full length record Silver and Fire was released in 2006 and saw Crafts reputation as a songwriter and producer become more widely recognized.[5][6] As well as receiving substantial airplay, Craft also appeared live at many festivals in Europe, at the Spiegeltent as part of the Sydney festival in Australia, where Silver and Fire was released under his full name of Martin Craft with an added disc of bonus tracks.[7]

Although Craft ended his relationship with 679 Recordings after Silver and Fire, he has continued to work as an independent artist and producer and released a second album in late 2009, titled Arrows at the Sun.[8]

This article uses material from the article Martin Craft from the free encyclopedia Wikipedia and it is licensed under the GNU Free Documentation License.

This One Paul McCartney
Update Required To play the media you will need to either update your browser to a recent version or update your Flash plugin.