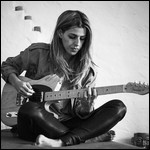 Brooke Gabrielle Fraser Ligertwood, better known as Brooke Fraser (born 15 December 1983), is a New Zealand singer and songwriter best known for her hit single "Something in the Water", released in 2010. Fraser released two studio albums What to Do with Daylight (2003) and Albertine (2006) through Columbia Records before signing a recording contract with Wood + Bone. Her third studio album, Flags was released in 2010 and it is her most successful album to date. Her most recent album, Brutal Romantic, was released in November 2014 through Vagrant Records.[1] She is one of the top selling and most popular New Zealand recording artists of all time: her albums were certified 15× Platinum. Fraser is also a member of the Christian music group Hillsong Worship and was songwriter and lead vocalist for the Grammy winning[2] song "What a Beautiful Name" which was credited under her married name Brooke Ligertwood.[3]

Fraser is the eldest of three children born to former All Black Bernie Fraser,[4] who was born in Lautoka, Fiji, and his wife Lynda.[5] Her father is of Fijian, Portuguese and Scottish descent.[6] Brooke grew up in Naenae, Lower Hutt and attended Dyer Street School, Naenae Intermediate School and Naenae College.[7]

Fraser took piano lessons between the ages of seven and seventeen. She started writing songs at age twelve and taught herself the acoustic guitar at fifteen.

She began writing for the Soul Purpose magazine at age fifteen, and was later made editor in 2002. She gave up her job as editor shortly after moving to Auckland in late 2002 in order to pursue her music career.[8]

In 2002, at the age of 18, Brooke signed a multi album deal with Sony Music, after a fierce bidding war between labels.[9]

Fraser's first album, What to Do with Daylight, was released in New Zealand in late 2003, debuting at number one and achieved gold status in the same week. The album eventually went seven times platinum,[10] selling over 105,000 copies in New Zealand alone.[11] It remained on the album charts for sixty-six weeks.[12] All five singles from the album reached the top twenty in the New Zealand Singles Chart.[13] Her album also topped the New Zealand Top 50 Albums for all of 2004.[14] The album also achieved gold status in Australia.

In 2005, prior to writing and preparing her follow-up album, Fraser took a trip to Rwanda before visiting her World Vision sponsor children in Tanzania. Brooke wrote the song Albertine about a young genocide victim (named Albertine), whom she met while in Rwanda. This song became her second album's title track.[17]

For this album, Fraser decided to enlist a new band of American session musicians who'd worked with an array of notable artists, both live and recorded.[18] In 2006, Fraser and the band went into the studio in Los Angeles to record the album with producer Marshall Altman. The first single Deciphering Me reached number four in the New Zealand single charts in 2006.

On 4 December 2006, the album, Albertine, was released in New Zealand, achieving double platinum status less than a month after its release. The album was released in Australia and internationally on 31 March 2007. In Australia, it charted at number twenty-nine in its first week on 9 April and has achieved Gold sales status.

Albertine was also Brooke's US debut, released on 27 May 2008. It entered the Billboard 200 at number ninety on 19 July 2008. The album was propelled by online sales after being chosen as Editor's Choice on iTunes.[19] In 2008 Brooke undertook a major world tour culminating the Montreal Jazz Festival and the Sheppard's Bush Empire in London, UK. Albertine (the single) won the prestigious APRA Silver Scroll for Song of the Year in 2007.

Flags was recorded at East West Studios in Hollywood in the summer of 2010[20] and released on 12 October 2010, in New Zealand, Australia and North America. Fraser celebrated with sold out tours in all territories. Flags reached the number one spot on the New Zealand album chart,[21] No. 3 in Australia.[22] and entered at No. 59 on the Billboard 200 in the US,[23] Flags has been certified Gold in Australia and 3x Platinum in New Zealand, where it was also the 6th highest selling album of 2010.[24] The first single, Something in the Water, has achieved extensive radio success across the globe, notably receiving BBC Radio 2 A-list rotation in the top 10 in Germany, Austria, Switzerland, Italy, Finland and Belgium and is a gold single in Germany and Italy.[25] The single achieved double platinum sales in NZ where it spent 21 weeks in the 2010 singles chart.[26] Flags was released in July 2011 in Europe and debuted in the album charts at number six in Germany, number thirty-three in Austria and number twenty-four in Switzerland. One month on from release, Flags remained in the German top twenty at number thirteen and Something in the Water on the singles charts at number eight. Flags was released in October 2011 in Hungary, reaching number fifteen on the national album chart by second week of release.[27] Flags was later released in Sweden, Norway, Denmark and Finland on 7 November 2011.[28]

In its review of Flags, Glide Magazine said: "Brooke Fraser's third release, Flags, is a wonder. From the stunning lyrical imagery throughout to the impressive guest vocalists who join her (Cary Brothers, Jon Foreman and Aqualung among them), from Fraser's ethereal and breathy performances to the wide-ranging soundscapes, this record is drenched in beauty and stands as one of the more remarkable achievements of 2010."[29]

After the release of Flags, Fraser signed a recording contract with Vagrant Records and started recording her fourth studio album. On 13 August 2014, Fraser released a "taster track" titled "Psychosocial" on SoundCloud.[30] The song marked a radical shift in musical direction for Fraser, as she moves from more acoustic and singer-songwriter based tunes to more electronic sounds. Her new single "Kings and Queens" went to radio on 22 September 2014, and was available for digital download on 26 September 2014. On 1 October she announced her fourth studio album Brutal Romantic would follow in November.[1][31] The album was released in Australia, New Zealand and South East Asia on 14 November 2014 and in North America on 17 November 2014. The album was produced by Brooke Fraser and David Kosten, except the track "Magical Machine" which was produced by Fraser, Kosten and Dan Wilson.[32] In September 2015, Fraser performed a song titled "Team, Ball, Player, Thing" as a part of a charity supergroup #KiwisCureBatten. It was an official supporters' song of the All Blacks in the 2015 Rugby World Cup. It was also in aid of research into Batten disease via the New Zealand charity Cure Kids. It was released as a single on 11 September 2015.[33] The day after it was released, the single debuted at number six on the New Zealand Top 40 chart.[34] In 2016, she released "Therapy", off her compilation album, A Sides, which was released 25 November 2016.[35]

After the success of her first album, Fraser moved to Sydney in 2004. On 17 March 2008 she married Scott Ligertwood, in Sydney, changing her name to Brooke Ligertwood.[36] "Brooke Fraser" has remained her stage name for her personal musical career.[37] In March 2015, Fraser announced she was pregnant with their first child.[38] A daughter, Dylan Wilde Ligertwood, was born on 18 September 2015.[39] Fraser currently lives in Los Angeles, where she is occasionally on the Sunday worship team at the Hillsong Church Los Angeles campus.[3] Another daughter, Rooney Ives Ligertwood, was born on 10 July 2017.[40][41]

In late 2010 whilst on tour in the US promoting her third album Flags, Fraser, in conjunction with charity: water ran a birthday campaign asking her fans to donate $27 in honour of her 27th birthday. The goal was to raise $50,000 to build clean water wells in Ethiopia.[42] Joining the likes of Justin Bieber,[43] Will Smith[44] and Adam Lambert[45] Fraser's birthday campaign raised over $54,000.

Fraser has worked with World Vision as an Artist Associate since 2001. She has visited Cambodia and Tanzania with World Vision, the Philippines with Opportunity International and independently travelled to Rwanda in June 2005, in June 2006 as part of charity event "Hope Rwanda", and in May 2007 when she filmed the music video for the song "Albertine" off her second studio album of the same name.

Fraser was one of many New Zealand performers to work alongside New Zealand comedy band Flight of the Conchords in their 2012 New Zealand Red Nose Day charity song "Feel Inside (and stuff like that)".[46]

This article uses material from the article Brooke Fraser from the free encyclopedia Wikipedia and it is licensed under the GNU Free Documentation License.

The Captain Of Her Heart Double
Update Required To play the media you will need to either update your browser to a recent version or update your Flash plugin.