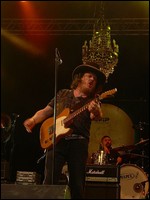 Zucchero is the Italian word for sugar. In his career, spanning four decades, Fornaciari has sold over 50 million records around the world[1] and has achieved numerous awards, including two World Music Awards, six IFPI Europe Platinum Awards[2] and a Grammy Award nomination.[3]

Adelmo Fornaciari was born in Reggio Emilia, Italy (in the frazione of Roncocesi) although he spent most of his childhood in the seaside town of Forte dei Marmi (Province of Lucca, Tuscany). Fornaciari currently lives in Pontremoli.

Early career and success in Italy

His musical career began in 1970, with several small bands such as I Ducali, Le Nuove Luci, Sugar & Daniel, Sugar & Candies and finally with a band named Taxi, with whom he won the Castrocaro Music Festival in 1981. He made his first appearance in the famous Sanremo festival next year with the songs "Una notte che vola via" and in 1983 with "Nuvola" at Festival dei Fiori. His first album, Un po' di Zucchero, was released the same year with moderate success.

In 1984, Fornaciari temporarily moved to California, where he collaborated for the first time with Italian producer Corrado Rustici. The result of these sessions, with a backing band that included bassist Randy Jackson, was the 1985 album Zucchero & The Randy Jackson Band, of which the single "Donne" became a huge hit in Italy. After the relative success of Zucchero & The Randy Jackson Band, Fornaciari and Rustici again gathered in California to work on a follow-up. Rispetto, which included several hit singles including the titletrack and "Come il sole all'improvviso", combining the Italo-pop sound of Fornaciari's earlier albums with a more American soul sound.

Although Zucchero & The Randy Jackson Band and Rispetto had been commercially successful, it was the 1988 album Blue's that went on to become the highest selling album in Italian history, and made Fornaciari a household name in Italy, and the rest of Europe. The album, again produced by Rustici and featuring musical performances by Clarence Clemons, The Memphis Horns and David Sancious, included the Italian hit singles "Con Le Mani" (with lyrics by Gino Paoli), the controversial "Solo una sana...", and the original version of "Senza una Donna" which later became an international hit in a duet version with Paul Young. During the following Blue's Tour Fornaciari shared the stage with Joe Cocker (for a cover of "With a Little Help From My Friends"), Ray Charles and Dee Dee Bridgewater.

After the million selling success of Blue's and Oro incenso e birra in Italy, and his collaborations with Joe Cocker, Stevie Ray Vaughan, Eric Clapton and Miles Davis, Fornaciari from 1990 on attempted to conquer the rest of Europe. The album Blues was released the following year in the United Kingdom, and in 1990 Zucchero Sings his Hits in English, an album that featured songs from the Blue's and Oro incenso e birra albums, some of which translated to English by Frank Musker, was released worldwide.

Fornaciari's best known hit "Senza una donna" ("Without a Woman"), in a duet with Paul Young, is from this album. The first pressing of the album didn't feature the duet: the song was performed by Fornaciari only. The duet was a great success worldwide, reaching the top 10 in European charts. Other European hit singles from this album include English versions of "Diamante" (of which the original Italian lyrics were written by Francesco De Gregori, and "Wonderful World" (with Eric Clapton). Diamante was later released as a duet with Randy Crawford, a variant not available on any album until the special edition of Zu & Co.

Between 1991 and 1993 Fornaciari continued duetting with some of the worlds most famous artists, such as Sting, Luciano Pavarotti, a young Andrea Bocelli, Peter Maffay, Elton John, Brian May and Eric Clapton. Many of these duets would later be included in the compilation Zu & Co. (2004). 1992 saw Fornaciari perform at The Freddie Mercury Tribute Concert, with the remaining three members of Queen, singing "Las Palabras de Amor". 1991 also saw the release of Fornaciari's first live album Live at the Kremlin, recorded in Moscow and featuring guest appearances by Randy Crawford (on John Lennon's "Imagine") and Toni Childs.

In 1992 Fornaciari released the album Miserere. Again produced by Corrado Rustici, it was a much darker album than Fornaciari's previous works, which was made clear by the title track, a duet with Luciano Pavarotti. Elvis Costello wrote the lyrics to the track "Miss Mary", U2's Bono was responsible for the English version of the title track and Paul Buchanan of The Blue Nile provided two sets of English lyrics. On the album and during the tour, Fornaciari was accompanied by former Santana drummer Michael Shrieve. The album Diamante was released in Mexico and other Latin American countries in 1994, and was an attempt to use the same method of Zucchero sings his hits in English for the Spanish and Latin American market, also in 1994 Fornaciari was the only European artist to perform at the 25th anniversary edition of the Woodstock festival.

The 1995 album Spirito DiVino, that included the smash European hits "Il Volo", "Papa perché?" and "X colpa di chi", is one of Fornaciari's most successful up to date: selling over 3 million copies in Europe alone and ending up on the first place in the Italian year charts, the album proved a huge commercial success. On the album Fornaciari adds a certain New Orleans blues feeling to his music (especially on songs like "Voodoo Voodoo") and is accompanied by musicians such as David Sancious, Jeff Beck (on "Papa Perché?"), Sheila E. (on "Alleluja", written with Italian rapper Jovanotti) and former Chuck Berry pianist Johnny Johnson.

The compilation The Best of Zucchero "sugar" Fornaciari´s greatest hits was released in 1996, shooting into all European charts, and up to the number one position in France and Italy. The CD, released in an Italian and an English version, contained 13 of Fornaciari's greatest hits (excluding the Miserere period) and three new songs including the hit single "Menta e rosmarino" ("I feel so lonely tonight"). During the sold out tour Fornaciari sang with Buddy Guy in Milan, and played "My Love" (the English version of "Il Volo") and "Un piccolo aiuto" (together with Eric Clapton) during the ´96 Pavarotti and Friends show. The Best of-tour also brought Fornaciari to the US for the first time playing to sold out clubs in New York and LA.

On the 1998 album Bluesugar, Fornaciari moved from Spirito DiVino´s New Orleans feeling to a more English rock style. The CD was produced by Corrado Rustici and the band included Santana bassist Benny Rietveld and bluesharp player Mark Feltham. Steve Winwood played Hammond on two songs and U2's Bono wrote the lyrics to the English version of "Blu". The CD went on to sell over 1 million copies in several months.

Following a lengthy tour to promote Bluesugar, Fornaciari took some time off to work on new music and reappeared in the summer of 2001 with the smash European single "Baila morena". Shake, the album that followed two months later, was again produced by Corrado Rustici, ended up being one of the fastest selling Fornaciari albums ever (2 million in Europe in 10 months). On the album blues god John Lee Hooker appears on the ballad "Ali D´Oro", his last recording before his death in June 2001. In 2002 and 2003 Fornaciari and his band toured throughout Europe and Canada with the Shake tour.

The spring of 2004 saw the release of the duet album Zu & Co.. On the album, which had been sixteen years in the making, Fornaciari duets with international stars such as Sting, B.B. King, Miles Davis, Maná, Sheryl Crow, Eric Clapton and Solomon Burke. On 6 May 2004 the album was presented during a concert in London's Royal Albert Hall, where many of the album's gueststars appeared to perform with Fornaciari. Zu & Co., and its American 2005 counterpart Zucchero & Co which was released on the Starbucks Hear Music label, became huge hits. In July 2005, Fornaciari took part in the Live 8 concerts in both Rome and Paris.

In September 2006 his album, Fly, was released. Produced by Don Was, it included the European hit singles "Bacco perbacco", "Cuba libre", "Occhi", and "Un Kilo", and features collaborations with artists such as Ivano Fossati and Jovanotti. The album's track "L'amore è nell'aria" ("Love Is In The Air"), borrows the instrumental backing to the b-side "Broken" by UK rock band Feeder, but it is a new recording based on the Feeder original rather than a sample taken directly from the recording. The FLY tour, kicking off in May in Paris, France, has included dates in most European countries, as well as the U.S. (including a show in Carnegie Hall in New York), and Latin America.

In November 2007, Fornaciari released a new compilation album with several new tracks, including a cover of Black's "Wonderful Life" and the PhD track "I won't let you down" (in the Italian adaption "Tutti i colori della mia vita". In the spring of 2008 Fornaciari began his All the Best tour, which so far included stops in Germany, the Netherlands, France, Austria, Switzerland, and Ireland, as well as performances at the Royal Albert Hall in London, the Kremlin in Moscow, and San Siro stadium in Milan. A short American tour, including another stop at Carnegie Hall, followed, as well as Fornaciari's first performances in Australia, where he was joined on stage by Tina Arena in Sydney, and concerts in the United Kingdom, and Italy. November 2008 also saw the release of Live in Italy, a 2 CD, 2 DVD boxset with recordings of performances in Verona in 2007 and Milan in 2008, as well as three new tracks, including the single "Una Carezza".

In November 2010, Fornaciari released a studio album entitled Chocabeck. The album was produced by Don Was and Brendan O'Brien and includes collaborations with Brian Wilson and U2's Bono. The first single in Italy was the song È Un Peccato Morir, and in the rest of Europe Chocabeck and Alla Fine. Fornaciari toured to promote this album in 2011.

This article uses material from the article Zucchero Fornaciari from the free encyclopedia Wikipedia and it is licensed under the GNU Free Documentation License.

Another Cup Of Coffee Mike & The Mechanics
Update Required To play the media you will need to either update your browser to a recent version or update your Flash plugin.