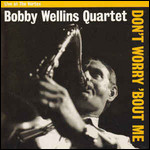 Born in Glasgow, Wellins studied alto saxophone and harmony with his father Max, and also played piano and clarinet during his early years. He subsequently joined the RAF as a musician playing tenor sax.[3] After demobilisation he played with a few Scottish bands before moving to London in the mid-1950s.[4] He was a member of Buddy Featherstonhaugh's quintet between 1956 and 1957,[3] together with Kenny Wheeler. Around that time Wellins also joined drummer Tony Crombie's Jazz Inc., where he first met up with pianist Tracey,[3] going on to join Tracey's quartet in the early 1960s. He also worked with Lionel Grigson in 1976.[5] At the end of the 1970s he was a member of the Jim Richardson Quartet.[3]

In the mid-1970s he led his own quartet with pianist Pete Jacobsen, bassist Adrian Kendon (replaced later by Ken Baldock, and then Andy Cleyndert in the 1980s) and drummer Spike Wells. In the 1980s he formed a quintet with fellow sax player Don Weller and then with guitarist Jim Mullen; the former group included Errol Clarke on piano, Cleyndert on bass and Wells on drums, while the latter featured Pete Jacobsen on piano. Since then Wellins has led various quartets, most notably with Liam Noble on piano, Simon Thorpe on bass and Dave Wickens on drums. Latterly he has renewed his association with drummer Spike Wells with a quartet featuring Mark Edwards on piano and Andrew Cleyndert on bass.

In 2012, Wellins was the subject of a documentary film, Dreams are Free, directed by Brighton-based Director Gary Barber. Using interview and concert footage, the film traces the rise, fall and redemption of Wellins, showing how he overcame addiction and depression, and rediscovered the desire to play after ten years away from jazz.

This article uses material from the article Bobby Wellins from the free encyclopedia Wikipedia and it is licensed under the GNU Free Documentation License.

Love Of The Common People Paul Young
Update Required To play the media you will need to either update your browser to a recent version or update your Flash plugin.