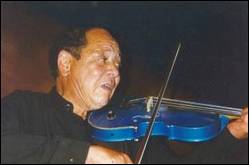 Harris was born and raised in Pasadena, California and started an act called Don and Dewey with his childhood friend Dewey Terry in the mid 1950s. Although they were recorded by Art Rupe on his Specialty label, mostly utilizing the services of legendary drummer Earl Palmer, Don and Dewey didn't have any hits. However, Harris and Terry co-authored such early rock and roll classics as "Farmer John", "Justine", "I'm Leaving It Up to You", and "Big Boy Pete," all of which became hits for other artists.

Harris was given the nickname "Sugarcane" by bandleader Johnny Otis and it was to remain with him throughout his life.

After separating from Dewey Terry in the 1960s, Harris moved almost exclusively over to the electric violin. He was to reappear as a sideman with John Mayall & the Bluesbreakers and Frank Zappa, most recognized for his appearances on Hot Rats, and on the Mothers of Invention albums Burnt Weeny Sandwich and Weasels Ripped My Flesh. His lead vocal and blues violin solo on a cover of Little Richard's "Directly From My Heart to You" on Weasels, and his extended solo on the lengthy "Little House I Used To Live In" on Weeny are considered highlights of those albums. Reportedly, he was rescued from a jail term by Zappa. Zappa had long admired Harris's playing and bailed him out of prison, resurrecting his career and ushering in a long period of creativity for the forgotten violin virtuoso. He played a couple of live concerts with Zappa's band in 1969.

During the early 1970s, Sugarcane fronted the Pure Food and Drug Act which included drummer Paul Lagos, guitarists Harvey Mandel and Randy Resnick, and bassist Victor Conte, who was the founder of the Bay Area Laboratory Co-operative (BALCO). Conte replaced Larry Taylor who was the original bass player. His first solo album (with back cover art by underground poster artist Rick Griffin) is a forgotten masterpiece of blues, jazz, classical and funk compositions, and his 1973 live album Sugarcane's Got The Blues, recorded at the Berlin Jazz Festival show an accomplished musician at the top of his game.

In the 1980s, Sugarcane was a member of the Los Angeles-based experimental rock band Tupelo Chain Sex.

This article uses material from the article Don "Sugarcane" Harris from the free encyclopedia Wikipedia and it is licensed under the GNU Free Documentation License.

This Is How (We Want You To Get High) George Michael
Update Required To play the media you will need to either update your browser to a recent version or update your Flash plugin.