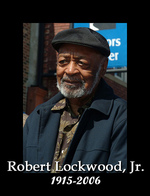 Robert Lockwood, Jr., also known as Robert Junior Lockwood, (March 27, 1915  November 21, 2006)[1] was an American Delta blues guitarist,[2] who recorded for Chess Records among other Chicago labels in the 1950s and 1960s. He is best known as a longtime collaborator with Sonny Boy Williamson II and for his work in the mid-1950s with Little Walter.

Robert Lockwood was born in Turkey Scratch, Arkansas, a hamlet west of Helena, Arkansas. He started playing the organ in his father's church at the age of 8. The famous bluesman Robert Johnson lived with Lockwood's mother for 10 years off and on after his parents' divorce. Lockwood learned from Johnson not only how to play guitar, but timing and stage presence as well. Because of his personal and professional association with the music of Robert Johnson, he became known as "Robert Junior" Lockwood, a nickname by which he was known among fellow musicians for the rest of his life, although he later frequently professed his dislike for this appellation.

By age 15, Lockwood was playing professionally at parties in the Helena area. He often played with his quasi-stepfather figure, Robert Johnson, also occasionally with Sonny Boy Williamson II or Johnny Shines. Lockwood played at fish fries, juke joints, and street corners throughout the Mississippi Delta in the 1930s. An anecdote from Lockwood's website claims on one occasion Robert Johnson played on one side of the Sunflower River, while Lockwood played on the other, with the people of Clarksdale, Mississippi milling about the bridge, supposedly unable to tell which guitarist was the real Robert Johnson.

Lockwood played with Sonny Boy Williamson II in the Clarksdale, Mississippi area in 1938 and 1939. He also played with Howlin' Wolf and others in Memphis, Tennessee around 1938. From 1939 to 1940 he split his time playing in St. Louis, Missouri, Chicago, Illinois and Helena.[3]

Also in 1941, Lockwood and Williamson were featured on the first King Biscuit Time radio program on KFFA in Helena. For several years in the early 1940s the pair played together in and around Helena and continued to be associated with King Biscuit Time. From about 1944 to 1949 Lockwood played in West Memphis, Arkansas, St. Louis, Chicago and Memphis.[3] Lockwood was an early influence of B. B. King and played with King's band during his early career in Memphis.

In 1950, Lockwood settled in Chicago. In 1954 he replaced Louis Myers as guitarist in Little Walter's band, and played on Walter's #1 hit "My Babe" in 1955. He left Little Walter's band shortly thereafter, and in the late '50s recorded several sessions with Sonny Boy Williamson for Chess Records, sessions which also included Willie Dixon and Otis Spann. Lockwood also performed and/or recorded with Sunnyland Slim, Eddie Boyd, and Muddy Waters among others.

In 1961, Lockwood moved with his wife to her hometown of Cleveland, Ohio where he resided until his death. In the early 1960s, as "Bob Lockwood, Jr., and Combo," he had a regular gig at Loving's Grill, located at 8426 Hough Avenue. In the 1970s through the 1990s, he performed regularly with his band the "All Stars" at numerous local venues, including Pirate's Cove, The Euclid Tavern, and Peabody's. For the last few years of his career, Lockwood played at Cleveland's Fat Fish Blue (corner of Prospect and Ontario in downtown) every Wednesday night at 8 p.m.; the "All Stars" have continued to perform there after his death.

His Cleveland period also saw the release of some of his most noteworthy studio recordings as a band leader, first with a pair of albums playing solo and with his band of the time on the Trix Records label, and then with Johnny Shines for two LPs on the Rounder label. The latter showed both men determinedly playing the music they were interested in, rather than the familiar requests of the blues audiencean attitude Lockwood maintained.[5] Although he seldom performed without his band, he also recorded a solo album of his own material, along with a few Robert Johnson standards, under the title Plays Robert and Robert. Lockwood has dealt briskly, sometimes brusquely, with the Johnson legend. It's typical that when he gave one of his infrequent album recitals of Johnson songs, for Plays Robert and Robert (1983), he puckishly chose to use a 12-string guitar.[5]

In 2004, Lockwood appeared at Eric Clapton's first Crossroads Guitar Festival in Dallas, Texas. A live recording with three other blues musicians in Dallas in October 2004Last of the Great Mississippi Delta Bluesmen: Live In Dallaswas awarded a Grammy for Best Traditional Blues Album. For Henry Townsend and Robert Lockwood Jr., it was the first Grammy win for the musicians.[6] His last known recording session was carried out at Ante Up Audio[7] studios in Cleveland; where he performed on the album The Way Things Go, with longtime collaborator Cleveland Fats for Honeybee Entertainment.

Lockwood died at the age of 91 in Cleveland, having earlier suffered a cerebral aneurysm and a stroke. He is buried at Riverside Cemetery in Cleveland.[8]

This article uses material from the article Robert Lockwood, Jr. from the free encyclopedia Wikipedia and it is licensed under the GNU Free Documentation License.