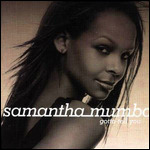 Samantha Tamania Anne Cecilia Mumba[1] (born 18 January 1983) is an Irish singer and actress. She shot to fame in 2000 with the release of her debut single "Gotta Tell You", which reached the Top 10 in Ireland, United Kingdom and the US.[2] After a relatively short music career, she starred in numerous films, most notably in the 2002 film The Time Machine. She has also appeared in a number of Irish independent films.[3] She returned to public attention when she appeared in the 2008 series of Dancing on Ice. In 2011 Mumba confirmed her retirement from music and to focus mainly on her acting career. However, in 2013, Mumba revealed via Twitter that she is currently in the studio working on new material.

Mumba was born in Dublin, Ireland.[4] Her father, Peter Mumba, is from Zambia and was formerly an aircraft engineer;[5] her mother is Irish. Mumba attended Dublin's Billie Barry Stage School from the age of three to fifteen. When Mumba was 15 she was discovered on a RTÉ TV talent show Let Me Entertain You by Irish music executive Louis Walsh (manager of Boyzone and Westlife). Walsh was impressed by her talent and she was signed to Polydor Records. She subsequently spent several months moving between Denmark, Sweden, the UK and Ireland, where she co-wrote and recorded her debut album, Gotta Tell You. She eventually dropped out of school to focus on her music career, explaining that it was becoming difficult to stay in school and work on her music.[6]

Mumba sings contralto.[7] Her first single, "Gotta Tell You", was released in 2000 and reached No. 1 in the Irish charts. It later reached No. 2 in the British charts. She also had success in the USA, with the song peaking at No. 4 on the Billboard Hot 100. The album Gotta Tell You stayed on the charts for six months and was eventually certified platinum for sales of 1 million copies. Five more Top 10 hits followed in the UK and she had another top 50 hit in the US. Another hit from this album was "Baby, Come Over", a remixed version of "Baby, Come on Over" and features on the US edition of the album. To date, her first album has sold over 4 million copies worldwide. In 2001, Mumba contributed to the track "You Raise Me Up" by the Celtic Tenors. An EP titled Samantha Sings Christmas was released at Christmas 2001; it is also a bonus disc on rare special editions of Gotta Tell You. In 1998, Mumba was cast as the lead in The Hot Mikado, a jazzy production based on Gilbert and Sullivan's opera.[2] After her second album Woman was cancelled, Mumba's music career was put on hold and she began auditioning for films. Before that, in 2001, following her international success with Gotta Tell You, Arnold Leibovit picked her to play Mara in The Time Machine. Mara is a girl who is part of a human civilisation which has regressed to a hunter/gatherer lifestyle in the year AD 802,701. She co-starred with Guy Pearce and her real-life brother, Omero. The movie earned $56,684,819 in the US. Mumba's second venture into films was in 2003, where she appeared in the film Spin the Bottle.

In 2001, Mumba and fellow teen star Aaron Carter performed a concert at Disney MGM Studios for the Disney Channel titled Aaron Carter and Samantha Mumba in Concert. She performed three songs, "Gotta Tell You", "Baby Come on Over", and "Don't Need You To". A year later, she and Carter also appeared on an episode of All That.

In 2002, Mumba released a new single "I'm Right Here" with a laid-back sound. The video features Damien Marley, son of Bob Marley. The single became Mumba's fifth UK top 5 single and her fifth top 40 single in Ireland. In the US and Germany, the song was less successful, peaking at 80 and 81. Rumors circulated that Mumba was getting ready to release a second album, Woman, but due to the poor sales of the lead single "I'm Right Here" in the US and a short lived time on the UK chart, she was dropped from her label, but Mumba stated on the Late Late Show (3 February 2007) that there never was a second album, and the tracks leaked on the internet were attempts by her to find a new sound. In December 2005, she collaborated with Filipino R&B singer Jay-R to sing Just the Way You Are.

On 23 October 2006, a compilation album, The Collection, was released. The album features songs from Gotta Tell You, B-sides and two new tracks including her single "I'm Right Here". The singer sold just a handful of tickets for a highly-publicised comeback concert in Dublin, which led to it being cancelled in February 2007.[8]

Mumba confirmed on The Late Late Show, 9 February 2007, that a camera crew has been following her on and off for six months for a reality TV show which was shown on Channel 4 at the end of March 2007. The show was called Get Your Act Together with Harvey Goldsmith and follows Mumba's attempts to revive her music career with Harvey Goldsmith as her mentor.

On 17 January 2008, Mumba appeared on UK daytime TV show Loose Women. After discussing her time away from the music scene, and her appearance on ITV reality TV show Dancing on Ice, which ended after three weeks, the singer stated that she had almost finished recording a new album, and hoped it would be released in summer 2008. Irish DJ Micky Modelle made a remix of Mumba's hit song "Gotta Tell You" and Mumba re-recorded some of the vocals to fit the song. A video for it was filmed in London and Belfast and was premiered in June 2008. The song failed to chart on the UK Singles Chart but did however chart at Number 36 on the UK Dance Chart. In a January 2009 interview, Mumba suggested that the new album would be released early in 2010, but it never surfaced and in late 2010, Mumba confirmed she would no longer be releasing new material and would be concentrating on her acting career.

On June 2013, Mumba confirmed her comeback on Twitter.[9] On 16 August 2013 she appeared on the RTÉ television show The Hit to compete for a spot in the show's final. The song selected for chart battle was "Somebody Like Me" which was released on iTunes immediately afterwards and will compete against "Thinking of You" by Irish band Republic of Loose. The song peaked number 5 on the Irish Singles Chart which marked her first hit single single in 11 years with "I'm Right Here" in 2002.

After a near three-year hiatus from the big screen, it was announced in 2009 that Mumba would star alongside Keith Duffy and Adelaide Clemens in the upcoming Irish horror movie Loftus Hall, which was due for release in cinemas October 2011.[10] Mumba was on The Saturday Night Show in November 2011.[11]

Shortly after the success of Gotta Tell You, Mumba was seen as the face of the fashion designer Louise Kennedy's spring/summer collection.[12]

She also became a Dior ambassador when she launched the Dior Watch Collection in Ireland. Around the same time, Mumba also became the face of Reebok appearing in print advertising in the UK and Ireland for the Quest range.[13]

In 2005, Mumba modelled for the Ultimo Per Amore range, available exclusively at the Irish main-street chain Dunnes Stores.[14]

This article uses material from the article Samantha Mumba from the free encyclopedia Wikipedia and it is licensed under the GNU Free Documentation License.

Good Things Take Time Aidan Martin
Update Required To play the media you will need to either update your browser to a recent version or update your Flash plugin.