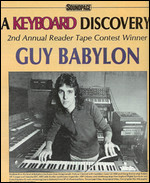 Babylon was born in New Windsor, Maryland. Growing up listening to the likes of Led Zeppelin, Yes and Gentle Giant, he attended Francis Scott Key High School and then moved on to the University of South Florida, earning a BFA in music composition. Upon graduation, he moved to Los Angeles, California. In 1988, he joined Elton John's studio and touring band, appearing on the album Sleeping with the Past. In 1990, he performed with the group Warpipes, a side project of fellow Elton John member Davey Johnstone.

Guy Babylon also arranged many Elton John introductions, including those used in "Bennie and the Jets" and "Pinball Wizard". 2001 was a good year for Babylon, as he won a Grammy Award for his contributions on the Elton John / Tim Rice musical Aida. Babylon also worked extensively on the Elton John / Bernie Taupin musical Lestat, (based on the Anne Rice novels). Until his death, he lived in Los Angeles with his wife and children, and was a member of Elton John's six-member touring and recording band. He died of a heart attack on September 2, 2009, while swimming in a pool.[1][2]

This article uses material from the article Guy Babylon from the free encyclopedia Wikipedia and it is licensed under the GNU Free Documentation License.

What Would You Do Angelheart
Update Required To play the media you will need to either update your browser to a recent version or update your Flash plugin.