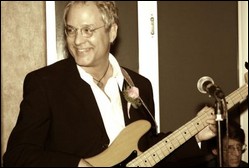 Hugh John McDonald (born December 28, 1950) is a well known session musician, best known for being the unofficial bassist in the American rock band Bon Jovi. Before joining Bon Jovi he was the bass player for the David Bromberg Band, touring extensively worldwide and playing on many Bromberg albums. He has played with many other artists, both live and in the studio, and has recorded with Willie Nelson, Richie Sambora, Steve Goodman, Ringo Starr, Lita Ford, Michael Bolton, Cher, Alice Cooper, Jon Bon Jovi, Ricky Martin, others and did a few dates during the Shania Twain, the Woman in Me TV tour.

He has worked with Bon Jovi in the studio since its inception and has been their live bassist since Alec John Such's departure after Cross Road was released in 1994, but is still regarded as an 'unofficial' member of Bon Jovi. Although he records with the band in studio and performs live on stage and during publicity performances, McDonald is left out of publicity shoots and album covers. He appears in some song videos but not others. Band members say they agreed never to officially replace former bass player Alec John Such. Regardless, his work with the band earned him a 1995 Metal Edge Readers' Choice Award for "Best Bassist" (tying with White Zombie's Sean Yseult).[1]

McDonald was one of the studio musicians that recorded Bon Jovi's original first demo for the song "Runaway". When the song became a local hit, Jon Bon Jovi assembled his current band without McDonald. He has also appeared on Jon Bon Jovi's solo album Destination Anywhere and was part of Jon's backing group, The Big Dogs.

In 2004 he married Kelli, a horse trainer and jewelry designer. They reside near Park City, Utah.

This article uses material from the article Hugh McDonald (musician) from the free encyclopedia Wikipedia and it is licensed under the GNU Free Documentation License.