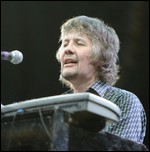 Inspired by his father, Norman Airey, Don Airey took a love for music at a young age and was trained in classical piano from the age of seven.[1] He continued his love for music by earning a degree at the University of Nottingham and a diploma at the Royal Northern College of Music (where he studied under Ryszard Bakst).[2]

In 1971 he moved to London and joined Cozy Powell's band Hammer. Don worked on several albums with solo artists and was a session musician on the 1978 Black Sabbath album Never Say Die! Soon after, he joined guitarist Ritchie Blackmore's band, Rainbow, and featured on Gary Moore's solo debut Back on the Streets. With Rainbow he contributed to two hit albums, Down to Earth and Difficult to Cure. He was also part of the very influential jazz rock band Colosseum II, with Jon Hiseman, Gary Moore, Mike Starrs, Neil Murray and later John Mole, which also formed the core band that recorded Julian Lloyd Webber's variations on a theme of Paganini, simply called Variations.

After leaving Rainbow in 1981, Airey joined with Ozzy Osbourne for a three-year stint where he helped with the albums Bark at the Moon and Speak of the Devil. He also played on the Diary of a Madman Tour from 1981 to 1982 and appears on Blizzard of Ozz and was also the only witness to Randy Rhoads's death. Airey joined Jethro Tull in 1987 for their tour in support of Crest of a Knave. The same year also saw the release of Whitesnake's multi-platinum Whitesnake, on which Airey played keyboards. (The album is known as 1987 in Europe.) Soon after he quit the band to record the solo album K2 – Tales of Triumph and Tragedy. In it he plays with Gary Moore, Keith Airey – guitars, Cozy Powell – drums, Laurence Cottle – bass, Chris (Hamlet) Thompson, Colin Blunstone, Mel Galley, Genki Hitomi – vocals.

In 1990, Airey recorded keyboard parts for several songs on Judas Priest's album Painkiller. However, because Judas Priest wanted the album to have a heavier sound than their previous work, it ultimately featured Airey on only one song, "A Touch of Evil".

In 1997 he arranged and played on "Love Shine a Light" by Katrina and the Waves, conducting the accompanying orchestra at the Eurovision Song Contest. The song won the contest.

In 1999 he joined Manchester-based melodic hard rock band Ten where he played keyboards on the album Babylon which was released in 2000. He also toured with the band in support of the new album.

In 2008 Airey released his second solo album, A Light in the Sky and recently it has been announced that another solo album from Airey is set to premiere in 2011.

In early 2014 Airey joined hard rock band Hollywood Monsters where he played keyboards (Hammond B3 organ) on the track "Move On" on the album "Big Trouble" which was released in 2014 on Mausoleum Records. The album features Steph Honde on vocals and guitars, Vinny Appice on drums, Tim Bogert on bass and Paul Di'Anno on lead vocals on the bonus track.[3]

Airey joined Deep Purple in 2001 to fill in for an injured Jon Lord, who subsequently retired from the band. Airey joined the band as a full-time keyboardist in March 2002. He has recorded four studio albums with the band, Bananas, Rapture of the Deep, Now What?! and Infinite.

Interviewed by Jeb Wright, for Classic Rock Revisited, about the album Now What?!, he said "Well, it’s Deep Purple and there is a Hammond there. There is only one way to go, really. Over the years, I have really worked on my sound, it didn’t just happen overnight. The first two, or three, years I was with the band, I was using Jon’s C3 and it was pretty knackered. I had it refurbished. It’s been put in mothballs now... I much prefer Hammond A-100’s, that’s my choice."[5]

Don Airey has employed many instruments and effect processors to aid him in the creation of his music and is well known for the use of his Hammond A100 organ. In an interview with Keyboard Magazine Don Airey explained that he preferred the Hammond A-100 over other organs (including the Hammond B-3) for their "purer tone" in live settings. He also uses Leslie 122 speakers and a Hughes and Kettner Puretone amplifier. For piano sounds, Airey uses a Kurzweil PC3K8 and also uses a MOOG Voyager. He also uses several rack and pedal based effects such as a Roland Fantom.[6]

Don Airey is also an endorsing artist for several effects companies including Neunaber Audio Effects and TC Electronic and currently uses a Neunaber Seraphim Shimmer as well as a TC Hall of Fame Reverb and a TC Flashback Delay.[7][8]

Airey lives with his wife, Doris, and their three children in South West Cambridgeshire. In 1992, Airey's son suffered from a serious illness, causing him to slow down his musical activity until 1995.[9] Airey is an ardent Sunderland A.F.C. fan.

He has a brother, Keith Airey, who played guitar for the reformed version of The Zombies from 2001 to 2010. He is currently lead guitarist for the London stage show Mamma Mia!

He also has another brother, Paul Airey, who played piano for SlowBone and Rollups. He works with Robbie Gladwell at the moment.

He is currently writing a book about his experiences in the music business.[1]

This article uses material from the article Don Airey from the free encyclopedia Wikipedia and it is licensed under the GNU Free Documentation License.