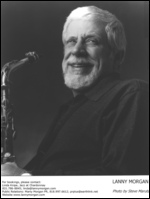 Morgan was raised in Los Angeles. In the 1950s he played with Charlie Barnet, Si Zentner, Terry Gibbs, and Bob Florence, then did a stint in the U.S. military, for which reason he had to turn down an offer to play in the orchestra of Stan Kenton. From 1960-65 he played in Maynard Ferguson's orchestra; after a few years in New York City he returned to Los Angeles in 1969, where he played frequently in the studios, was a member of Supersax, and played in the big bands of Bill Berry, Bob Florence, and Bill Holman.

This article uses material from the article Lanny Morgan from the free encyclopedia Wikipedia and it is licensed under the GNU Free Documentation License.

Every Time You Cry John Farnham & Human Nature
Update Required To play the media you will need to either update your browser to a recent version or update your Flash plugin.