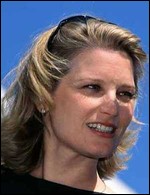 Bridget Jane Fonda (born January 27, 1964) is an American actress. She is best known for her roles in films such as The Godfather Part III, Single White Female, Point of No Return, It Could Happen to You, and Jackie Brown. She is the daughter of Peter Fonda, niece of Jane Fonda and granddaughter of Henry Fonda.

Fonda was born in Los Angeles, California into a family of actors, including her grandfather Henry Fonda, her father Peter Fonda, and her aunt Jane Fonda. Her mother, Susan Jane Brewer, is an artist.[1] She is named after actress Margaret Sullavan's daughter Bridget Hayward who committed suicide at the age of 21. Sullavan was Henry Fonda's first wife. Bridget's parents divorced and Peter remarried Portia Rebecca Crockett (former wife of author Thomas McGuane). Peter and Portia brought up Bridget, her brother Justin, and older stepbrother Thomas McGuane Jr (born circa 1962) in the Coldwater Canyon section of Los Angeles as well as just south of Livingston, Montana, where both brothers attended high school. Fonda attended Westlake School for Girls in Los Angeles. During this time she and Justin had little contact with the Fonda family, with Bridget recalling in an interview: "When I was a kid, the most important thing for me was my home. People would come and go and things would change but that place wouldn't. I loved it. I want to have that for the rest of my life. I want to have a place".

Fonda first became involved with the theatre when she was cast in a school production of Harvey. She refused to solicit acting tips and advice from her famous relatives and studied method acting at New York University's Tisch School of the Arts and the Lee Strasberg Theatre Institute and graduated from NYU in 1986.[2]

She made her film debut at the age of five in the 1969 movie Easy Rider as a child in the hippie commune that Peter Fonda and Dennis Hopper visit on their trek across the United States. Her second (also non-speaking) bit part was in the 1982 comedy Partners. In 1988 she got her first substantial film role, costarring with John Hurt in Scandal, based on the Profumo affair. That year she also appeared in You Can't Hurry Love and Shag.

Her breakthrough role, however, was as a journalist in The Godfather, Part III. After gaining additional work experience in a few theater productions she was cast in the lead in Barbet Schroeder's Single White Female, followed by a role in Cameron Crowe's ensemble comedy Singles, both in 1992. A review in the New Yorker proclaimed her "provocative, taunting assertiveness", and Rolling Stone said Fonda was "a comic delight". In 1997 Fonda was on the same plane flight as Quentin Tarantino when he offered her the part of a beach babe in Jackie Brown. Fonda was also offered the lead role in the television series Ally McBeal (later accepted by Calista Flockhart), but turned it down to focus on her film career.[3]

Fonda has not appeared in films since 2002. On November 29, 2003 she married film composer and former Oingo Boingo frontman Danny Elfman.[4] She has a son named Oliver.[5]

This article uses material from the article Bridget Fonda from the free encyclopedia Wikipedia and it is licensed under the GNU Free Documentation License.

When The Light Is Gone Stevans
Update Required To play the media you will need to either update your browser to a recent version or update your Flash plugin.