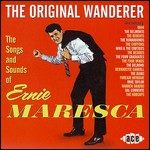 He began singing and writing in a doo-wop group, the Regents, who later had a hit with "Barbara Ann". His song "No-One Knows" came to the attention of Dion DiMucci, who recorded it successfully with the Belmonts on Laurie Records, the record reaching #19 on the Billboard Hot 100 record chart in 1958. Maresca then began songwriting full-time, writing "Runaround Sue" with Dion, and then "The Wanderer" - his biggest success, although his run of hits with Dion continued with "Lovers Who Wander" and "Donna the Prima Donna".

In 1961, he was offered a recording contract with Seville, a small New York label. His protestations that he was not much of a singer were brushed aside, and he wrote a hit for himself, "Shout! Shout! (Knock Yourself Out)", which reached #6 on the Billboard Hot 100 chart in early 1962. He continued to record, with less success, for the remainder of the 1960s, but also continued as a writer with hits including "Whenever a Teenager Cries" for Reparata and the Delrons, and "Party Girl" for Bernadette Carroll. He also wrote, along with Jimmy Curtiss, the Jimmie F. Rodgers' 1967 comeback (and last) hit, "Child of Clay". By the 1970s he was head of Laurie Records' publicity department, and continued as a record company executive.

This article uses material from the article Ernie Maresca from the free encyclopedia Wikipedia and it is licensed under the GNU Free Documentation License.

These Are The Days Of Our Lives Queen
Update Required To play the media you will need to either update your browser to a recent version or update your Flash plugin.