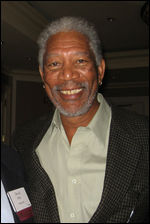 Morgan Porterfield Freeman, Jr. (born June 1, 1937) is an American actor, film director, and narrator. He is noted for his reserved demeanor and authoritative speaking voice.

Freeman has received Academy Award nominations for his performances in Street Smart, Driving Miss Daisy, The Shawshank Redemption and Invictus and won in 2005 for Million Dollar Baby. He has also won a Golden Globe Award and a Screen Actors Guild Award.

Freeman has appeared in many other box office hits, including Unforgiven, Glory, Seven, Deep Impact, The Sum of All Fears, Bruce Almighty, Batman Begins, The Bucket List, Evan Almighty, Wanted, and The Dark Knight.

Morgan Freeman was born in Memphis, Tennessee, the son of Mayme Edna (née Revere) and Morgan Porterfield Freeman, Sr., a barber who died in 1961 from liver cirrhosis. Freeman was sent as an infant to his paternal grandmother in Charleston, Mississippi.[1][2][3] He has three older siblings. Freeman's family moved frequently during his childhood, living in Greenwood, Mississippi; Gary, Indiana; and finally Chicago, Illinois.[3] Freeman made his acting debut at age 9, playing the lead role in a school play. He then attended Broad Street High School, currently Threadgill Elementary School, in Mississippi. At age 12, he won a statewide drama competition, and while still at Broad Street High School, he performed in a radio show based in Nashville, Tennessee. In 1955, he graduated from Broad Street High School, but turned down a partial drama scholarship from Jackson State University, opting instead to work as a mechanic in the United States Air Force.

Freeman moved to Los Angeles in the early 1960s and worked as a transcript clerk at Los Angeles Community College. During this period, he also lived in New York City, working as a dancer at the 1964 World's Fair, and in San Francisco, where he was a member of the Opera Ring music group. Freeman acted in a touring company version of The Royal Hunt of the Sun, and also appeared as an extra in the 1965 film The Pawnbroker. He made his off-Broadway debut in 1967, opposite Viveca Lindfors in The Nigger Lovers[4][5] (about the civil rights era "Freedom Riders"), before debuting on Broadway in 1968's all-black version of Hello, Dolly!, which also starred Pearl Bailey and Cab Calloway.

Although his first credited film appearance was in 1971's Who Says I Can't Ride a Rainbow?, Freeman first became known in the American media through roles on the soap opera Another World and the PBS kids' show The Electric Company,[3] (notably as Easy Reader and Vincent the Vegetable Vampire) which he later said he should have left earlier than he did.

Beginning in the mid-1980s, Freeman began playing prominent supporting roles in many feature films, earning him a reputation for depicting wise, fatherly characters.[3] As he gained fame, he went on to bigger roles in films such as the chauffeur Hoke in Driving Miss Daisy, and Sergeant Major Rawlins in Glory (both in 1989).[3] In 1994 he portrayed Red, the redeemed convict in the acclaimed The Shawshank Redemption. He also starred in films such as Robin Hood: Prince of Thieves, Unforgiven, Seven, and Deep Impact. In 1997, Freeman, together with Lori McCreary, founded the movie production company Revelations Entertainment, and the two co-head its sister online movie distribution company ClickStar. Freeman also hosts the channel Our Space on ClickStar, with specially crafted film clips in which he shares his love for the sciences, especially space exploration and aeronautics.

After three previous nominationsa supporting actor nomination for Street Smart, and leading actor nominations for Driving Miss Daisy, and The Shawshank Redemptionhe won the Academy Award for Best Supporting Actor for his performance in Million Dollar Baby at the 77th Academy Awards.[3] Freeman is recognized for his distinctive voice, making him a frequent choice for narration. In 2005 alone, he provided narration for two films, War of the Worlds and the Academy Award-winning documentary film March of the Penguins.

In 1991, Freeman was offered a lead role in Jurassic Park. Unsure that dinosaurs could make for interesting co-stars, Freeman traveled to the American Museum of Natural History to see the "damn beasts". In a 2007 interview with Atlanta Radio Correspondent Veronica Waters, Freeman revealed that he was stunned when he learned that birds are descended from dinosaurs. While he turned down the role, Freeman spent the next summer reading books on ornithology. This would later lead to his desire to narrate the documentary March of the Penguins.

Freeman appeared as God in the hit movie Bruce Almighty and its sequel, Evan Almighty, as well as Lucius Fox in the critical and commercial success Batman Begins and its 2008 sequel, The Dark Knight. He starred in Rob Reiner's 2007 film The Bucket List, opposite Jack Nicholson. He teamed with Christopher Walken and William H. Macy for the comedy The Maiden Heist, which was released direct to video due to financial problems of the distribution company. In 2008, Freeman returned to Broadway to co-star with Frances McDormand and Peter Gallagher for a limited engagement of Clifford Odets's play, The Country Girl, directed by Mike Nichols.

He has wanted to do a film based on Nelson Mandela for some time. At first he tried to get Mandela's autobiography, Long Walk to Freedom, adapted into a finished script, but it could never be finalized.[6] In 2007 he purchased the film rights to a pre-published 2008 book by John Carlin, Playing the Enemy: Nelson Mandela and the Game that Made a Nation.[7] Clint Eastwood directed the Nelson Mandela bio-pic titled Invictus, starring Freeman as Mandela and Matt Damon as rugby team captain Francois Pienaar.[8] It was reported in July 2009 that Freeman is in talks to co-star alongside Bruce Willis in Red.[9]

Effective January 4, 2010, Freeman replaced Walter Cronkite as the voiceover introduction to the CBS Evening News featuring Katie Couric as news anchor.[10] CBS cited the need for consistency in introductions for regular news broadcasts and special reports as the basis for the change.[10]

Freeman was married to Jeanette Adair Bradshaw from October 22, 1967, until 1979. He married Myrna Colley-Lee on June 16, 1984. The couple separated in December 2007. Freeman's attorney and business partner, Bill Luckett, announced in August 2008 that Freeman and his wife are in the process of divorce.[11] He has two sons from previous relationships. He adopted his first wife's daughter and the couple also had a fourth child. Freeman lives in Charleston, Mississippi, and New York City. He has a private pilot's license, which he earned at age 65,[12] and co-owns and operates Madidi, a fine dining restaurant, and Ground Zero, a blues club, both located in Clarksdale, Mississippi. He officially opened his second Ground Zero in Memphis, Tennessee on April 24, 2008.

Freeman has publicly criticized the celebration of Black History Month and does not participate in any related events, saying, "I don't want a black history month. Black history is American history."[13] He says the only way to end racism is to stop talking about it, and he notes that there is no "white history month".[14] Freeman once said on an interview with 60 Minutes' Mike Wallace: "I am going to stop calling you a white man and I'm going to ask you to stop calling me a black man."[13] Freeman supported the defeated proposal to change the Mississippi state flag, which contains the Confederate battle flag.[15][16]

On October 28, 2006, Freeman was honored at the first Mississippi's Best Awards in Jackson, Mississippi, with the Lifetime Achievement Award for his works on and off the big screen. He received an honorary degree of Doctor of Arts and Letters from Delta State University during the school's commencement exercises on May 13, 2006.[17]

In 2008 Freeman's family history was profiled on the PBS series African American Lives 2. A DNA test showed that he is descended from the Songhai and Tuareg peoples of Niger.

In 2004 Freeman and others formed the Grenada Relief Fund to aid people affected by Hurricane Ivan on the island of Grenada. The Grenada Relief Fund has since become PLANIT NOW, an organization that seeks to provide preparedness resources for people living in hurricane and severe-storm afflicted areas.[18]

Freeman has worked on narrating small clips for global organizations, such as One Earth,[19] whose goals include raising awareness of environmental issues. He has narrated the clip "Why Are We Here", which can be viewed on One Earth's website.

Freeman has donated money to the Mississippi Horse Park in Starkville, Mississippi. The Horse park is part of Mississippi State University. Freeman has several horses that he takes there.[23]

Wikinews has news related to: American actor Morgan Freeman in serious condition after car accident Freeman was injured in an automobile accident near Ruleville, Mississippi, on the night of August 3, 2008. The vehicle in which he was traveling, a 1997 Nissan Maxima, left the highway and flipped over several times. He and a female passenger, Demaris Meyer, were rescued from the vehicle using the "Jaws of Life". Freeman was taken via medical helicopter to The Regional Medical Center (The Med) hospital in Memphis.[24][25] Police ruled out alcohol as a factor in the crash.[26] Freeman was coherent following the crash, as he joked to a photographer about taking his picture at the scene.[27] He broke his shoulder, arm and elbow in the crash and had surgery on August 5, 2008. Doctors operated for four hours to repair nerve damage in his shoulder and arm.[28] His publicist announced he was expected to make a full recovery.[29][30] Meyer, his passenger, has sued him for negligence, claiming that he was drinking the night of the accident.[31] She has denied reports that they were romantically involved.[32]

In July 2009 Freeman was one of the presenters at the 46664 concert (celebrating Nelson Mandela's birthday) at Radio City Music Hall, NYC.

Other awards and honoraries

This article uses material from the article Morgan Freeman from the free encyclopedia Wikipedia and it is licensed under the GNU Free Documentation License.