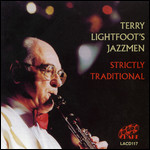 Terry Lightfoot (21 May 1935 15 March 2013)[1] was a British jazz clarinettist and bandleader, and together with Chris Barber, Acker Bilk and Kenny Ball was one of the leading members of the trad jazz generation of British jazzmen.

Lightfoot was born in Potters Bar, Hertfordshire - England. He started his musical career as a vocalist during school-life, singing popular songs with a small amateur variety group. In 1949, he came to jazz while at Enfield Grammar School[2] in Enfield (Outer London). He changed from playing the trumpet to clarinet to meet the needs of the traditional Dixieland jazz band of his friends. After leaving school, he formed his first jazz band, the 'Wood Green Stompers'.

In 1955, he formed his band, the 'Terry Lightfoot's New Orleans Jazzmen'. They had three minor hit records in the UK Singles Chart in 1961 and 1962 with "True Love", "King Kong" and "Tavern in the Town".[3] The Jazzmen made regular appearances on Sunday nights at the Wood Green Jazz Club.

This article uses material from the article Terry Lightfoot from the free encyclopedia Wikipedia and it is licensed under the GNU Free Documentation License.

Hä cho Enderlin Chicks
Update Required To play the media you will need to either update your browser to a recent version or update your Flash plugin.