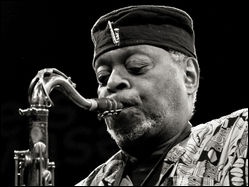 Walter Dewey Redman (May 17, 1931 – September 2, 2006)[1] was an American jazz saxophonist, known for performing free jazz as a bandleader, and with Ornette Coleman and Keith Jarrett.

Redman played mainly tenor saxophone, though he occasionally doubled on alto saxophone, played the Chinese suona (which he called a musette) and on rare occasions played the clarinet.

His son is saxophonist Joshua Redman.

Redman was born in Fort Worth, Texas. He attended I.M. Terrell High School, and played in the school band with Ornette Coleman, Prince Lasha and Charles Moffett.[2][3] After high school, Redman briefly enrolled in the electrical engineering program at the Tuskegee Institute in Alabama, but became disillusioned with the program and returned home to Texas. In 1953, Redman earned a bachelor's degree in Industrial Arts from Prairie View Agricultural and Mechanical University. While at Prairie View, he switched from clarinet to alto saxophone, then, eventually, to tenor. Following his degree, Redman served for two years in the US Army.

Upon his discharge from the Army, Redman began working on a master's degree in education at the University of North Texas. While working on his degree, he taught music to fifth graders in Bastrop, Texas, and worked as a freelance saxophonist at night and weekends around Austin, Texas. In 1957, he graduated in Education with a minor in Industrial Arts.[4] While at North Texas, he did not enroll in any music classes.[5]

Towards the end of 1959, Redman moved to San Francisco, a musical choice resulting in an early collaboration with clarinetist Donald Rafael Garrett.[4][6]

Redman was best known for his collaborations with saxophonist Ornette Coleman, with whom he performed in his Fort Worth high school marching band. He later performed with Coleman from 1968 to 1972, appearing on the recording New York Is Now!, among others. He also played in pianist Keith Jarrett's American Quartet (1971–1976), whose album The Survivors' Suite was voted Jazz Album of the Year by Melody Maker in 1978.[7] In the mid-70s Redman formed the Quartet Old And New Dreams together with fellow Coleman-alumni Don Cherry, Charlie Haden and Ed Blackwell. They recorded four albums in the period to 1987.

Redman also performed and recorded as an accompanying musician with jazz musicians who performed in varying styles within the post-1950s jazz idiom, including drummer Paul Motian and guitarist Pat Metheny. In 1981 he performed at the Woodstock Jazz Festival, held in celebration of the tenth anniversary of the Creative Music Studio.

With a dozen recordings under his own name Redman established himself as one of the more prolific tenor players of his generation. Though generally associated with free jazz (with an unusual, distinctive technique of sometimes humming into his saxophone as he played), Redman's melodic tenor playing was often reminiscent of the blues and post-bop mainstream. Redman's live shows were as likely to feature standards and ballads as the more atonal improvisations for which he was known.

On February 19 and 21, 2004, Redman played tenor saxophone as a special guest with Jazz at Lincoln Center, in a concert entitled "The Music of Ornette Coleman". Reviewing the performance, Howard Mandell, wrote: "Redman, a veteran of Coleman's bands, played on "Ramblin'" and "Peace", demonstrating more originality, maturity and conviction than anyone else on the bandstand."[9]

Redman died of liver failure in Brooklyn, New York, on September 2, 2006. He was survived by his wife, Lidija Pedevska-Redman, as well as sons Tarik and Joshua, who is also a jazz saxophonist. The father and son recorded two albums together.[10] He is buried at the Calverton National Cemetery in Calverton, Suffolk County, New York.[11]

With Old and New Dreams

This article uses material from the article Dewey Redman from the free encyclopedia Wikipedia and it is licensed under the GNU Free Documentation License.