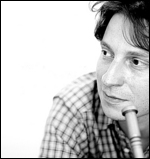 Presencer showed his first interest in what was to become his chosen instrument, the trumpet, at nine. He attributes his early determination to become a trumpeter to hearing Roy Eldridge's solo from a Jazz at the Philharmonic concert. He has cited Dizzy Gillespie, Lee Morgan, Freddie Hubbard, Kenny Wheeler, Woody Shaw, and Clifford Brown as early influences.[1]

When he was eleven, he became the youngest trumpeter with the National Youth Jazz Orchestra. At the age of 18, he began playing with pianist Stan Tracey, in his big band, octet, septet, and in duo, playing a live concert at London's Queen Elizabeth Hall, later released on Blue Note Records.

In January 2010, Presencer was as a soloist with the Danish Radio Big Band for the opening of the Danish National Concert Hall. Later the same year he became a regular member of the big band and moved to Copenhagen.[3]

Presencer has collaborated frequently with contemporary classical music composer Siobhan Lamb as an improvising soloist. Two albums were released in 2012 by the Naxos label Proprius: Meditations and The Nightingale and the Rose.

As a session musician, he has recorded with Sting, Jamiroquai, Zero 7, James Brown, Ray Charles, Joni Mitchell, and Jonny Greenwood.[2]

He is the featured soloist on the 2011 BAFTA Award-winning score for the computer game L.A. Noire, which features Mark Turner, John Taylor, David Freidman, Jeff Ballard, and Larry Grenadier.

Presencer was the Head of the Jazz Department at the Royal Academy of Music from 1999 until 2010 and was Head of the Brass Department at The Jazz Institute, Berlin from 1999-2016. He has given workshops in European jazz conservatories (including Amsterdam, Helsinki and Copenhagen).

In 2015, his book about the technical requirements of trumpet playing in improvised music was released by Warwick Music.

This article uses material from the article Gerard Presencer from the free encyclopedia Wikipedia and it is licensed under the GNU Free Documentation License.

Hold On Santana
Update Required To play the media you will need to either update your browser to a recent version or update your Flash plugin.