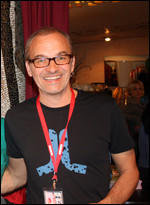 Clarence Öfwerman, born 22 November 1957, is best known as the longtime producer of Roxette,[1] having been with the band from their debut album Pearls of Passion in 1986 through to 2012's Travelling, Roxette's latest studio album. He is the big brother of Roxette percussionist, keyboardist and vocalist Staffan Öfwerman. Öfwerman also joins Per Gessle[2] and Roxette[3] as a live musician on various tours, most recently during the 2009 Night of the Proms series in Belgium, the Netherlands, and Germany.[1] and a mini European tour in 2010. He will join Roxette for their first world tour in 16 years in 2011.

This article uses material from the article Clarence Öfwerman from the free encyclopedia Wikipedia and it is licensed under the GNU Free Documentation License.

Shape Of My Heart Backstreet Boys
Update Required To play the media you will need to either update your browser to a recent version or update your Flash plugin.