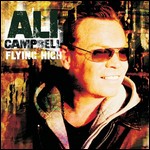 Alistair Ian "Ali" Campbell (born 15 February 1959) is an English singer and songwriter who was the lead singer and a founding member of the English reggae band UB40. As part of UB40, Campbell sold over 70 million records worldwide and toured the globe for 30 years. In 2008, Campbell left UB40 and embarked on a solo career. In 2012, Campbell was announced as one of the three judges on the judging panel of the TV show, New Zealand's Got Talent. In August 2014, Campbell announced that he had reunited with former UB40 band mates Astro and Mikey to record a new album, Silhouette, released on 6 October 2014.[1]

Alistair Ian Campbell was born in Birmingham, England. He is the brother of former bandmate Robin Campbell and current UB40 frontman Duncan Campbell, and is a son of the late Scottish folk singer Ian Campbell. He is a father of eight children, including two with his current wife, Julie.[2]

In October 2007, Campbell released a solo album entitled Running Free. It entered the UK charts at number 9 and went gold. This was the first top ten entry for Campbell for a new studio album since UB40s Labour of Love 3 album, which was released 10 years prior to Running Free.

On 24 January 2008, it was reported that Campbell was to quit the group after almost 30 years.[3] Campbell, who was a founding member of UB40, songwriter and lead vocalist who sang on hits such as "Red, Red Wine", finally quit the band in 2008. Their last gigs together were in February 2008 in Australia, New Zealand and Uganda.[3]

Campbell then issued a statement on his website and through his solicitors stating that for many years he had been unhappy with the business practices and business managers of UB40 and launched an investigation into the financial handling of the business. This was the reason for his departure.

On 18 October 2010 Ali released his fourth solo album Great British Songs—a collection of British pop and rock hits from the 1960s and 1970s. The album reached 15 on the UK Albums Chart where it remained for three weeks. It also gave Campbell his third top 15 charting album in as many years.[4] Critic David Jefferies of AllMusic said of the album, "Longtime fans will appreciate that Campbell’s voice is as strong as ever, but it deserves a better showcase than this mixed bag".[5] Campbell's label Jacaranda Music was number one on the UK independent chart in October 2010 and Great British Songs also entered the iTunes reggae album chart at number one.[6]

In 2012, Campbell was announced as one of the three judges on the judging panel of the TV show, New Zealand's Got Talent, along with Jason Kerrison and Rachel Hunter. In 2013, Campbell was replaced for the third series by American choreographer Cris Judd.[7]

In August 2014 Campbell announced that he had reunited with former UB40 band mates Astro and Mikey Virtue to record a new album, Silhouette.[1] He said of his brother Duncan's singing, "I sat back for five years and watched my brother Duncan murdering my songs. We’re saving the legacy".[8] A Real Labour of Love is set for release in March 2018, an album much in the vein of UB40's Labour of Love series.[9]

As part of UB40, Campbell has sold over 70 million records, and notched up four number 1 singles around the world plus over 40 singles in the UK Top 40. (See UB40 discography.)

In the UK, his solo albums Big Love and Running Free both reached the UK Top 10, while Flying High and Great British Songs reached the Top 20. Campbell scored a number 1 hit in 1994 as featured artist, along with brother Robin, on Pato Banton's cover of The Equals' "Baby Come Back".

Whilst with UB40 Campbell received an Ivor Novello Award for International Achievement. At the 2007 Grammy Awards, UB40 were nominated for best reggae album of 2006. Mauritius Government award to Ali Campbell for his services to Music and Charity – December 2010

This article uses material from the article Ali Campbell from the free encyclopedia Wikipedia and it is licensed under the GNU Free Documentation License.

Karaoke Girl 77 Bombay Street
Update Required To play the media you will need to either update your browser to a recent version or update your Flash plugin.