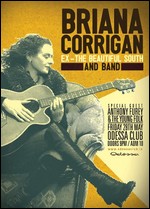 She was born in Northern Ireland, but when she was eleven years old, her family moved from Belfast to Portstewart, County Londonderry. She moved to Newcastle upon Tyne in England at the age of eighteen study for her BA in Creative and Performing Arts and, while there, she began singing with The Anthill Runaways. Go! Discs Records, who were considering signing the band, made her an offer to travel to Hull and sing with Paul Heaton and Dave Hemingway of The Beautiful South. Soon after she was asked to go to Milan with the band to help record their debut album, Welcome to the Beautiful South. She appeared alongside Dave Hemingway on the band's only UK Singles Chart number 1 single, "A Little Time".

After appearing on three albums, Corrigan left the band in 1992 to pursue a solo career. The decision was prompted partly by a desire to record her own work and partly by ethical disagreements with some of Heaton's lyrics, particularly songs such as "36D", which criticized British glamour models and the industry that employed them. Hemingway later remarked, "We all agree that we should have targeted the media as sexist instead of blaming the girls for taking off their tops".[1][2][3]

Her time with the band culminated in one of the fastest-selling British albums in history, Carry On up the Charts The Best of the Beautiful South. After she left the band, she reunited with producer Mike Hedges who had produced the first two TBS Albums, and recorded the solo critically acclaimed album, When My Arms Wrap You Round, in 1996 on East West Records. The first single, "Love Me Now", the UK Singles Chart at No.48.[4] This was the only single released as Corrigan and her Record Company parted company a few months after the album's release.

Corrigan relocated to Dublin, Republic of Ireland where she wrote and recorded an album with ex-A House frontman, Dave Couse. The album was never released although both have recorded songs from that period in later solo works. She was also part of the Dublin music collective, Lokomotive, which released a number of singles on an independent label. Corrigan then stepped away from the music industry to secure a Masters Degree in Creative writing from Queens University Belfast and split her time between bringing up her young family, acting and writing. In 2006, she performed in the first Irish tour of 'Mum's The Word' a West End hit described by Stage magazine as, 'a wickedly funny account of motherhood than nobody should miss'. In 2006, she returned to the studio to write and record a new album. The end result was the 2012 album, Red Bird, released on her own label, Redbird&Anchor Records. The same year she wrote her first play which toured nationally throughout Ireland and Scotland in Autumn, 2012.

This article uses material from the article Briana Corrigan from the free encyclopedia Wikipedia and it is licensed under the GNU Free Documentation License.