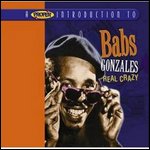 Babs Gonzales (October 27, 1919 – January 23, 1980), born Lee Brown, was an American jazz vocalist of the bebop era notable for writing the song "Oop-Pop-A-Da", which was recorded and performed by his band, Three Bips and a Bop, and was later made famous by Dizzy Gillespie.

Gonzales was born Lee Brown in Newark, New Jersey, but he and his brothers were all called Babs. He studied piano at an early age and learned to play drums. Looking for whatever money-making opportunities he could find, he made his way to Los Angeles, as he recalls in his memoir I Paid My Dues.... Wearing a turban in Hollywood in the 1940s, he called himself Ram Singh. His networking and hustling talents landed him the job as Errol Flynn's "foreign" chauffeur. He adopted the name Ricardo Gonzales to pass himself off as Mexican rather than black to get a room in a good hotel. He got a break as a vocalist when he was asked to fill in for Mel Tormé.

He was an exponent and pioneer of vocalese, an example of which is his version of the Charlie Parker bop standard "Ornithology". From 1950 to 1953, Gonzales was road manager and vocalist for the James Moody band and later gigged and recorded with musicians such as Jimmy Smith, Bennie Green, Lenny Hambro, Johnny Griffin, and Bennie Green on the 1958 Blue Note album Soul Stirrin' (which took its name from and included Gonzales' eponymous composition). Spending time in Europe, Gonzales performed at Ronnie Scott's in London in 1962, where he picked 22-year-old Brian Auger to be his piano accompanist.[2] He was also a Beat poet.

This article uses material from the article Babs Gonzales from the free encyclopedia Wikipedia and it is licensed under the GNU Free Documentation License.

Breakfast In America Supertramp
Update Required To play the media you will need to either update your browser to a recent version or update your Flash plugin.