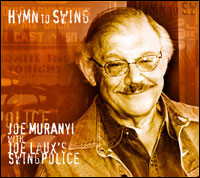 Muranyi studied with Lennie Tristano but was primarily interested in early jazz styles such as Dixieland and swing. After playing in an United States Army Air Forces band, he moved to New York City in the 1950s and attended the Manhattan School of Music and Columbia University. In the 1950s he played under Eddie Condon, collaborating with Jimmy McPartland, Max Kaminsky, Yank Lawson, Bobby Hackett, and Red Allen. During that decade he also played with the Red Onion Jazz Band (195254), Danny Barker (1958), and Wingy Manone.

In 1963, Muranyi played with The Village Stompers, a Dixieland band which reached the pop charts with its song "Washington Square". From 1967 to 1971 he was the clarinetist with the Louis Armstrong All-Stars. Armstrong, after initially struggling to pronounce Muranyi's Hungarian family name, introduced him on stage as "Joe Ma Rainey", to Muranyi's own amusement. Following this he played with Roy Eldridge, World's Greatest Jazz Band (1975), Cozy Cole, Lionel Hampton, Herman Autrey, Wild Bill Davison, Zutty Singleton, and others.

As a special guest Joe Muranyi gave a performance in March and June 2000 in Prague and Berlin together with the Prague band J.J.Jazzmen in their "Show in remembrance of Louis Armstrong".

Muranyi did extensive work as a record producer and wrote liner notes for hundreds of albums. He was also an enthusiastic vocalist and played both soprano and tenor saxophone.

This article uses material from the article Joe Muranyi from the free encyclopedia Wikipedia and it is licensed under the GNU Free Documentation License.

The Little Radius
Update Required To play the media you will need to either update your browser to a recent version or update your Flash plugin.