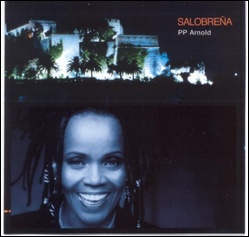 Arnold was born into a family of gospel singers and performed as a vocal soloist for the first time when she was four years old. Her family lived in the African-American Watts ghetto of Los Angeles.[2]

Arnold married early and had two children, Kevin and Debbie. She worked two jobs, one in an office and the other in food manufacturing, until 1964, when Maxine Smith, an ex-girlfriend of her brother, contacted her with an offer. Maxine and her friend Gloria Scott had managed to arrange an audition for three girls to replace the original Ikettes, the dancer/singer troupe that provided vocal and dance accompaniment for the Ike & Tina Turner Revue. Smith contacted Arnold, whom she knew to be a singer. At the audition the three young women were offered the job on the spot, but Smith convinced Arnold to attend a concert in Fresno that night before making a final decision. When she arrived home at 6:00 the next morning, Arnold's furious husband struck her. Arnold left him immediately, and after placing her children in the care of her parents, joined the Ike & Tina Turner Revue.[2][3]

Arnold quit the Turner band in 1966 while on tour in the UK in order to remain in London and establish a solo career with Mick Jagger's encouragement. She noted the difference between how she had been treated in America and how she was received in England, saying, "A young black woman on her own in America in a white environment would not have been treated as well as I was in England."[2] She enjoyed several major British hits on Immediate, including songs written for her by Paul Korda, who wrote "The Time Has Come." She also recorded songs written by Steve Marriott and Ronnie Lane from labelmates Small Faces, who also backed her on several recordings, and Arnold had a brief romantic liaison with Marriott in 1967.[4] She toured with the Small Faces during 1967-68, made several TV appearances with them, and featured as backing vocalist on two of the group's biggest hits, "Itchycoo Park" and "Tin Soldier". Other credits in this period include her duet with Rod Stewart on the single "Come Home Baby" (produced by Mick Jagger on Immediate Records, with Ron Wood on guitar, Keith Richards on bass, Nicky Hopkins on electric piano, Keith Emerson on Hammond organ and the Georgie Fame Brass Section), as well as Chris Farlowe's version of the Motown standard "Reach Out (I'll Be There)" (with Albert Lee on guitar and Carl Palmer on drums).

Her first backing band, the Blue Jays, had been inherited from American soul singer Ronnie Jones and included former Bluesbreakers guitarist Roger Dean. This was followed by the Nice, led by Keith Emerson on organ who had just quit from the VIPs (later to be known as Spooky Tooth), David O'List on guitar, Lee Jackson on bass and Ian Hague on drums. During this period she scored several hits including the original version of the Cat Stevens song "The First Cut Is the Deepest"[3] and "Angel of the Morning", plus the Marriott-Lane song "(If You Think You're) Groovy".[5]

After the collapse of Immediate in the late 1960s, Arnold signed a production contract with the Robert Stigwood Organisation and released two singles on the Polydor label, produced by Barry Gibb, but a planned album with Gibb was never completed.[1] Between 1969 and 1970, she recorded eleven songs which were produced by Gibb himself but only two of the songs "Bury Me Down By the River" and "Give a Hand, Take a Hand" were released. In February 1970, she sang harmony vocals on the song "Born" which was included on Gibb's debut solo album The Kid's No Good.[6]

In 1970 she moved to the musical stage, appearing alongside P.J. Proby in the rock musical Catch My Soul. She then formed a new backing band that included the future members of Ashton, Gardner and Dyke, plus Steve Howe, who would soon join Yes. During this period she renewed her association with Steve Marriott, recording and touring with his new band Humble Pie (Rock On), as well as contributing session musician backing vocals for many notable UK and US recordings including the original 1970 album recording of the rock musical Jesus Christ Superstar, Nick Drake's "Poor Boy", and recordings by Dr. John, Graham Nash, Gary Wright, Manassas, Nektar, Jimmy Witherspoon, Nils Lofgren and Eric Burdon.[7] She toured with Eric Clapton, who also produced a number of unreleased sessions with her; during these sessions she met American bassist Fuzzy Samuels of Crosby, Stills, Nash & Young, and they subsequently became involved romantically and had a son, Kodzo.[2] In 1974 she sang on the Freddie King album Burglar[8] and feeling out of place in the rapidly changing British music scene of the mid-1970s, Arnold and Samuels returned to her hometown of Los Angeles. While living there, Arnold's relationship with Samuels ended and just two weeks after the split, her daughter Debbie was killed in a car accident. After her daughter's death, Arnold withdrew from public life for some time, not re-emerging until 1978. At this time she was reunited with Barry Gibb, who wanted to complete the never-finished solo album for her. In 1981 she moved to Hollywood but returned to England the following year to raise her younger son there. She began working with leading British reggae band Steel Pulse and returned to the charts in both the UK and Australia on the hit 1983 cover version of the Staple Singers "Respect Yourself", recorded with British electropop group Kane Gang, which reached #21 in Britain and #19 in Australia.

In 1984, she returned to the stage in the cast of the musical Starlight Express as Belle the Sleeping Car, after which she worked with a number of noted British acts including Boy George as well as working on several film soundtracks. Weeks before beginning a tour with Billy Ocean, her legs were badly injured in a car accident. She went ahead with the Ocean tour, at first appearing on crutches, but her injuries eventually forced her to leave the tour after ten weeks. Without a record contract and unable to play live, Arnold survived by doing sessions for advertising jingles. In 1986 she returned to the rock scene, featuring prominently as a backing vocalist on Peter Gabriel's worldwide hit "Sledgehammer". This was followed by a successful collaboration with The Beatmasters on the retro-styled Acid House hit "Burn It Up", which reached #14 in Britain in October 1988, and became her third hit to spend 10 weeks or more on the UK Singles Chart.[5] "Burn It Up" was included on the Beatmasters' album Anywayawanna. During the late 1980s and 1990s Arnold resumed an active career as a session vocalist, and her credits in this period included The KLF ("What Time Is Love?", "3 A.M Eternal"), Nina Hagen, Roger Waters (Amused To Death), and Graham Parker. In 1989 she reunited with her old friend Steve Marriott to record his solo album 30 Seconds to Midnite, which proved to be their final collaboration before Marriott died in a house fire in 1991. She then later worked with the UK Hardcore group Altern 8 on their single “E-Vapor-8” in 1992.

In 1994, she joined the cast of the award-winning musical Once on This Island as Erzulie, beautiful Goddess of Love. While the production was playing in Birmingham she met leading UK band Ocean Colour Scene, one of the new wave of latter-day mod groups who (like their mentor Paul Weller), idolised the Small Faces.[1] In 1995 Arnold joined forces with Primal Scream to record a blistering cover version of the Small Faces' song "Understanding", the opening track of the various artists Small Faces tribute album, Long Agos and Worlds Apart.

Arnold joined forces with Chaz Jankel, former pianist with Ian Dury and the Blockheads. This was followed by an invitation to tour widely with Roger Waters. She was a backup vocalist on his 1999–2002 tour In the Flesh (also on the CD and DVD of the same name), as well as the 2006–2008 tour, Dark Side of the Moon Live. Her version of "The First Cut is the Deepest" was featured in the soundtrack of the 2012 movie Seven Psychopaths.[9]

This article uses material from the article P. P. Arnold from the free encyclopedia Wikipedia and it is licensed under the GNU Free Documentation License.