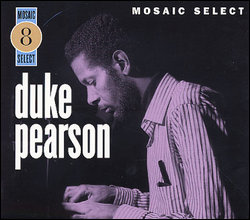 Columbus Calvin "Duke" Pearson Jr. (August 17, 1932 – August 4, 1980) was an American jazz pianist and composer. Allmusic describes him as having a "big part in shaping the Blue Note label's hard bop direction in the 1960s as a record producer."[1]

Pearson was born Columbus Calvin Pearson Jr. in Atlanta, Georgia, to Columbus Calvin and Emily Pearson. The moniker "Duke" was given to him by his uncle, who was a great admirer of Duke Ellington. Before he was six, his mother started giving him piano lessons. He studied the instrument until he was twelve,[2] when he took an interest in brass instruments: mellophone, baritone horn and ultimately trumpet. He was so fond of the trumpet that through high school and college he neglected the piano. He attended Clark College while also playing trumpet in groups in the Atlanta area. While in the U.S. Army, during his 1953–54 draft, he continued to play trumpet and met, among others, the pianist Wynton Kelly.[3] Pearson himself confessed in a 1959 interview that he was "so spoiled by Kelly's good piano" that he decided to switch to piano again.[2] Also, it seems that dental problems forced him to give up brass instruments.[1]

Pearson performed with different ensembles in Georgia and Florida, including with Tab Smith and Little Willie John, before he moved to New York City in January 1959. He had, however, been able to get at least one song, "Tribute to Brownie" (dedicated to Clifford Brown), recorded by the Cannonball Adderley Quintet on their 1957 album, Sophisticated Swing. In New York, Pearson gained the attention of the trumpeter Donald Byrd, who saw Pearson performing with the Art Farmer/Benny Golson Sextet (known as the Jazztet). Shortly afterwards, Byrd asked Pearson to join his newly formed band, the Donald Byrd–Pepper Adams Quintet. Pearson was also the accompanist for Nancy Wilson on tour in 1961. During that same year, Pearson became ill before a Byrd-Adams show, and a newcomer, Herbie Hancock, took over for him. Hancock eventually took over the position permanently.[4]

On the 1963 Byrd album A New Perspective, Pearson arranged four tracks, including "Cristo Redentor", which became a hit. The composition, Pearson later commented, was inspired by a trip he took to Brazil while touring with Wilson.[4] Also that year, after the death of Ike Quebec, Pearson took over his position as A&R man of Blue Note.[4] From that year until 1970, Pearson was a frequent session musician and producer for numerous Blue Note albums while also recording his own albums as bandleader. This was odd, since Pearson also recorded with his co-led big band with Byrd for Atlantic Records, a stipulation he made sure was in his Atlantic contract.[4] The Byrd-Pearson band consisted of musicians such as Chick Corea, Pepper Adams, Randy Brecker, and Garnett Brown; the latter three were members also of the Thad Jones-Mel Lewis band that played the same night club, The Village Vanguard, but on different nights. Between the two ensembles, the musicians performed at their own discretion.

Pearson's compositions include the now standard, frequently covered "Jeannine", composed c. 1960. An early cover of "Jeannine" appears on the Cannonball Adderley album Them Dirty Blues, recorded in February 1960; the song was also covered by Donald Byrd on the album At the Half Note Cafe, recorded in November 1960. A vocalese version with lyrics by Oscar Brown, Jr. was recorded by Eddie Jefferson on the album The Main Main, recorded in October 1974,[5] and was covered on The Manhattan Transfer's 1984 album Bop Doo-Wopp. The Steve Lehman Trio recorded the song on their 2011 album Dialect Fluorescent.

Pearson eventually retired from his position with Blue Note in 1971 after personnel changes were made; co-founder Alfred Lion retired in 1967 after the label was sold to Liberty Records the previous year, and co-founder Francis Wolff died in 1971. Pearson opted to teach at Clark College in 1971, toured with Carmen McRae and Joe Williams through 1973, and eventually re-formed his big band during that time.

He was diagnosed with multiple sclerosis in the 1970s, from which he died in 1980 at Atlanta Veterans Hospital.[4]

This article uses material from the article Duke Pearson from the free encyclopedia Wikipedia and it is licensed under the GNU Free Documentation License.

Sorrento Moon (I Remember) Tina Arena
Update Required To play the media you will need to either update your browser to a recent version or update your Flash plugin.