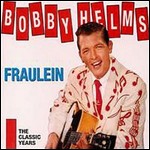 Robert Lee Helms (August 15, 1933 – June 19, 1997), known professionally as Bobby Helms, was an American country music singer who enjoyed his peak success in 1957 with the seasonal hit "Jingle Bell Rock". His other hits include "Fraulein" and "My Special Angel".

Helms was born in Helmsburg, Indiana,[1] the son of Hildreth Esther (née Abram) and Fred Robert Helms.[2] His family was musical. Helms began performing as a duo with his brother, Freddie, before going on to a successful solo career in country music. In 1956, Helms made his way to Nashville, Tennessee, where he signed a recording contract with Decca Records. The following year was filled with successes. Helms' first single in 1957, titled "Fraulein", went to No. 1 on the country music chart and made it into the Top 40 on the Billboard Best Sellers in Stores chart. Later that same year, he released "My Special Angel", which also hit No. 1 on the country charts and entered the Top 10 on Billboard's pop music chart, peaking at No. 7.

Released in the very late fall of 1957, his song "Jingle Bell Rock" was a big hit and was being played and danced to on Dick Clark's teen dance show American Bandstand by mid-December of that year. It also re-emerged in four out of the next five years, and sold so well that it repeated each time as a top hit, becoming a Christmas classic still played to this day. (In 2016, it was rated radio's third most played Christmas song, according to StationIntel.)[3]

It took five years for the song to become a second million-seller for Helms.[4] It reached No. 6 on the Billboard Hot 100 and spent 21 weeks in the chart.[4] The record gained gold disc status.[4] Accounts that Helms wrote and recorded the song with Hank Garland seem to be apocryphal—ASCAP and Allmusic list the writers of the song as Joseph Beal, Joseph Carlton, James Ross and James Boothe.

Helms continued touring and recording for the next three decades. His pioneering contribution to the genre has been recognized by the Rockabilly Hall of Fame.

Helms spent most of his later years living just outside Martinsville, Indiana, until his death from emphysema and asthma at the age of 63 in 1997.[5]

He was portrayed by actor Brad Hawkins in the 2007 film Crazy.

Another record by Helms was "Schoolboy Crush", which was a hit in the UK. It was released in the USA on June 23, 1958 on Decca. The same song was then covered by UK teen star Cliff Richard about the same time as the UK release.

This article uses material from the article Bobby Helms from the free encyclopedia Wikipedia and it is licensed under the GNU Free Documentation License.

Turned The Bad Times To Good Stefania Kaye
Update Required To play the media you will need to either update your browser to a recent version or update your Flash plugin.