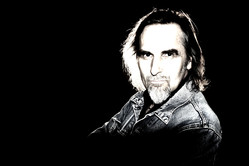 Fernando von Arb or simply FVA (born January 17, 1953), is a Swiss guitarist, songwriter and producer. He is best known for being the lead guitarist of the Swiss hard rock band, Krokus.

Von Arb once played in the band Montezuma, and eventually joined up with Chris von Rohr and Tommy Kiefer in the early 70's. He joined the two in To You All as the rhythm guitarist. In the 1970s Von Arb was encounter trouble finding a power voice for his band until he discovered Maltese-born Marc Storace to lead his band's vocals for years to come. Von Arb and Storace have been apart for a few albums, but are still in Krokus to this day. Before this, Storace and Von Rohr quit the band, leaving Von Arb to create another band with ex-Krokus member Juerg Naegeli. They took pseudonyms which were Rob Weiss and Ben Branov (Branov is von Arb spelled backwards), and the two released a couple of albums that were big in Switzerland.

In 1990, Von Arb assembled another line-up for Krokus, which would be shunned and uncared for. Around the same time, there was suspicion that Von Arb may have been diagnosed with lymphoma, but is healthy now.

1994 rolled around and Von Arb again tried to build Krokus. He was successful and this time added former vocalist, Marc Storace. Failing to keep Storace in 1999 proved to be a downfall. Round 13 was released, but was less noticed. In 2004, Von Arb and Storace were reunited once again and released live albums that proved to be an advantage of having Storace.

In 2005, Von Arb called it quits on Krokus due to tendonitis in his wrist. He would be replaced by Mandy Meyer. In 2007 he was able to recruit the original line-up. In 2008 the band played live shows and it included Mark Kohler, another member of the original line-up which was a landmark in the band's history. Krokus released Hoodoo in 2010.

Von Arb and Krokus released Dirty Dynamite on March 5, 2013, with minor success in the US, but a major hit in Switzerland. It contains a cover of the Beatles hit song "Help".

This article uses material from the article Fernando von Arb from the free encyclopedia Wikipedia and it is licensed under the GNU Free Documentation License.

By My Side Chris de Burgh
Update Required To play the media you will need to either update your browser to a recent version or update your Flash plugin.