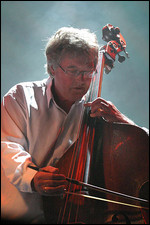 Arild Andersen (born 27 October 1945 in Lillestrøm, Norway) is a Norwegian Jazz musician (upright bass) and composer, known as the most famous Norwegian bass player in the international jazz.[1]

Andersen started his musical career as jazz guitarist in «The Riverside Swing Group» in Lillestrøm (196163), started playing double bass in 1964, and soon became part of the core jazz bands in Oslo. He was a member of Roy Hellvin Trio, was in the backing band at Kongsberg Jazz Festival in 1967 and 68, was elected Best bassist by Jazznytt in 1967, og started as bass player in the Jan Garbarek Quartet (1967-1973), including Terje Rypdal and Jon Christensen. After completing his technical education in 1968, he became a professional musician and collaborated with a number of the best known musicians next Garbarek, like the Norwegian Jazz singer Karin Krog, George Russell and Don Cherry (Berlin 1968), and was in the line up (rhythm section) for visiting American musicians like Phil Woods, Dexter Gordon, Bill Frisell, Hampton Hawes, Johnny Griffin, Sonny Rollins, Sheila Jordan and Chick Corea. In the samenperiod he also worked with Don Cherry, George Russell, Ferenc Snétberger and Tomasz Stako.[1]

Andersen collaborated in the early 1970s with Norwegian musicians like Magni Wentzel, Jon Eberson, Ketil Bjørnstad and Terje Rypdal, before leaving for an eventful visit to the U.S.A. in the winter 1973-1974, and has since 1974 led his own bands, at first a Quartet (197479). He was in the line up for the astonishing Radka Toneff Quintet (197581), and has more than a dozen album releasesas as band leader on the label ECM, initiated critically acclaimed band Masqualero, and appeared as side man on a series of recordings. In January 2009 he was named "Musicien Europeen 2008" by the French "Academie du Jazz",[2] and in 2010 Andersen received yet another prestigious award, the Ella Award presented at the Oslo Jazzfestival.[1]

This article uses material from the article Arild Andersen from the free encyclopedia Wikipedia and it is licensed under the GNU Free Documentation License.

Who I Am Nick Mellow
Update Required To play the media you will need to either update your browser to a recent version or update your Flash plugin.