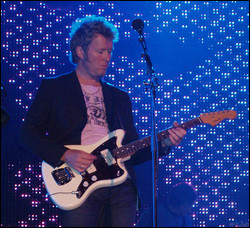 Magne Furuholmen (born 1 November 1962) is a Norwegian musician and visual artist. Furuholmen, better known to music fans by his stage name Mags, is the keyboardist of the synthpop/rock band A-ha, and co-wrote many of the band's hits including "Take On Me", "Stay on These Roads", "Manhattan Skyline", "Cry Wolf", "Forever Not Yours", "Analogue (All I Want)", and "Foot of the Mountain".[1][2]

Furuholmen is also an visual artist with solo exhibitions held in Norway, the UK, and elsewhere in Europe. His work is represented in private and public institutions and museums worldwide, among them The Norwegian State Archives, Bibliothèque Nationale de France, and others. In 2017 the University of Agder in Norway nominated five new honorary doctors in connection with the university's 10th anniversary. The degree was awarded for significant scientific or artistic efforts. Magne Furuholmen was one of the recipients. [3]

Furuholmen was born in Oslo, the son of jazz trumpeter Kåre Furuholmen (1940–69) and Anne-Lise Furuholmen (b. 1940).[4] He was raised in Manglerud, Oslo (along with A-ha colleague and co-writer Paul Waaktaar-Savoy). He has one sister, Line, and two half brothers, Thorstein and Trygve Christian. His father, a jazz musician who played trumpet with Bent Sølves Orkester, was killed in an aeroplane crash over Drammen, south of Oslo in 1969, when Magne was just six. Remarkably, this very accident was witnessed by a nine-year-old Morten Harket, thirteen years before the two were to meet for the first time.[2][5]

Furuholmen also revealed in an interview published by Norway's third largest newspaper Dagbladet (in its additional magazine Magasinet) that he suffers from a heart disease. The news was picked up the same day by Side-Line music magazine.[6]

Furuholmen has been the keyboardist with A-ha since their formation in 1982, though he also plays guitar. Magne Furuholmen created the legendary synth-riff of "Take On Me", which they referred to as «the Juicy Fruit song» at the time, when he was only 15 years old.[7] The synth-riff was later sampled in the American hit-song "Feel This Moment" featuring Pitbull and Christina Aguilera in 2012.[8]

Magne Furuholmen co-wrote most of the a-ha classics with Paul Waaktaar-Savoy, including "Scoundrel Days", "Manhattan Skyline", "Cry Wolf", "We're Looking for the Whales", "Soft Rains of April", "Love Is Reason", "I Dream Myself Alive", "Stay on These Roads", "Touchy!", "Hurry Home", "Early Morning", "I Call your Name", "Move To Memphis", "Minor Earth Major Sky", "Little Black Heart", "The Company Man", "Analogue (All I Want)", "The Bandstand", "Foot of the Mountain", and the band's first and biggest hit "Take On Me". Magne Furuholmen has also performed live together with Chris Martin of Coldplay, who introduced Mags as "the best keyboard player in the world".[9] Furuholmen has written or co-written the majority of songs on albums like "Lifelines" and "Analogue", and his co-writing and single track contributions make up most of the tracks on "Scoundrel Days", "East of the Sun, West of the Moon" and "Foot of the Mountain" as well. Mags has written songs such as "Cosy Prisons" (includes backing vocals by Graham Nash of Crosby, Stills, Nash & Young), "Lifelines" and "I Wish I Cared" for a-ha, and he takes lead vocals on a couple recorded album songs with a-ha including "The Summers of Our Youth". When a-ha went on hiatus in 1994, Furuholmen began working on other music projects. The band reconvened in 1998, though announced they would split in 2010.[1]

Furuholmen's projects outside of A-ha include Timbersound, formed in 1994 with Kjetil Bjerkestrand, and later, Swedish singer, Freddie Wadling. Their work has been used on film soundtracks such as Ti Kniver I Hjertet (1994), "Hotel Oslo" (1997) which also featured vocals by Anneli Drecker, 1732 Høtten (1998) where the album Hermetic is featured.

Furuholmen also recorded "Past Perfect Future Tense" in 2004, with appearances from Guy Berryman and Will Champion of Coldplay, and from Andy Dunlop of the Scottish band Travis. In 2008 Magne Furuholmen released his second solo album titled "A Dot of Black in the Blue of Your Bliss" which includes tracks like "The Longest Night" which later was made into a-ha song "Foot of the Mountain".

In early 2005, Furuholmen featured on a Cat Stevens (Yusuf Islam) song, titled "Indian Ocean", about the 2004 Indian Ocean earthquake and tsunami disaster. The song featured Indian composer/producer A. R. Rahman, Magne Furuholmen and Travis drummer Neil Primrose. Proceeds of the single went to help orphans in Banda Aceh, one of the areas worst affected by the tsunami, through Yusuf's Small Kindness charity.[18]

In 2012 Magne Furuholmen was a mentor on the show The Voice – Norges beste stemme. His talent Martin Halla won the contest and had his first album produced by Furuholmen himself who is also an estimated songwriter/producer for other artists.

In 2014 Furuholmen agreed to compose the songs and supervise the recordings for the Norwegian film "Beatles".[19][20]

In 2008 Furuholmen collaborated with Coldplay bassist Guy Berryman and Mew vocalist Jonas Bjerre under the band name of Apparatjik for the theme to the BBC Two series, Amazon.[21] The theme was made available (along with exclusive tracks from various other artists) on the Survival International charity album, Songs for Survival.

In 2010 Apparatjik released their first album We Are Here, a digital album also available physically via their website. Apparatjik has performed in a cube at venues like The Neue Nationalgalerie in Berlin, The Serpentine Gallery in London, The State Museum of Denmark in Copenhagen and The Norwegian National Gallery. Apparatjik is described by themselves as an artist collective falling between art and mainstream culture, but happy in the fall.[22]

Magne announced on Jo Wiley's show on BBC Radio 2 in October 2010 that he intends to work with his friends in MEW and Coldplay after retiring from A-ha in December.[23]

Furuholmens work is represented in institutions and collections in his native Norway and worldwide. Among his permanent public commissions are 'Resonance' for The city of Bergen, as well as his largest commission to date (work in progress) - a ceramic sculpturepark in the Oslo region consisting of 50 tonnes of clay, to be unveiled in August 2015. Magne Furuholmen is also a well known visual arts artist working with glass, paint, etching and woodcut and has exhibited his works all around the world.[24]

His art has been displayed at The Henie Onstad Kunstsenter in Oslo, and he has also shown his work at The London Art Fair. In 2001, Furuholmen was commissioned to design an official Norwegian postage stamp. In 2005 he decorated the 11 floors of the Royal Caribbean International cruiseship Adventure of the Seas with sheets of glass of his work.[1][4]

2014: Furuholmen started working on his biggest commission to date, for what will be Scandinavia's largest ceramic sculpture-park to be unveiled in 2015.[24]

2015: Magne is exhibiting works in Edinburgh, and his collaboration with Dovecot Studios of Edinburgh for his "Peeling a Glass Onion" exhibition was made into a shortfilm shown on the BBC-website.[25]

This article uses material from the article Magne Furuholmen from the free encyclopedia Wikipedia and it is licensed under the GNU Free Documentation License.

What I'm Here For Nicholas Wells
Update Required To play the media you will need to either update your browser to a recent version or update your Flash plugin.