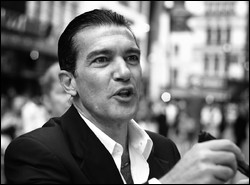 José Antonio Domínguez Banderas (born August 10, 1960), better known as Antonio Banderas, is a Spanish film actor and singer. He began his acting career at age 19 with a series of films by director Pedro Almodóvar and then appeared in high-profile Hollywood films including Assassins, Evita, Interview with the Vampire, Philadelphia, Desperado, The Mask of Zorro, the Spy Kids and Shrek film series.

Banderas was born in Málaga, Andalusia, Spain. The son of doña Ana Banderas, a school teacher, and José Domínguez, a police officer in the Guardia Civil.[1][2] He also has one brother, Francisco. Banderas was raised as a Roman Catholic, and has gone with his family to the Holy Week in Málaga. However, he has, on occasion, prayed to the Virgin of Guadalupe.[3] He took his mother's surname as his stage name.[4] He initially wanted to play soccer professionally, but his dream ended when he broke his foot at age 14. As a young man, he travelled to Madrid, in order to make a career in the Spanish film industry.

Banderas' acting career began at the age of 19, when he worked in small theatres during the Movida period. He first gained wide attention of the Spanish audience through starring on a set of films by director Pedro Almodóvar between 1982 and 1990. These films included Labyrinth of Passion ("Laberinto de pasiones", 1982), Matador (1986), Law of Desire ("La Ley del Deseo", 1987), Women on the Verge of a Nervous Breakdown ("Mujeres al borde de un ataque de nervios", 1988), and Tie Me Up! Tie Me Down! ("¡Átame!", 1989), in which he performed his breakthrough role as "Ricky".

He began appearing in American films; some of his earlier roles there included the 1992 film, The Mambo Kings, as well as a supporting role in the Oscar-winning 1993 film, Philadelphia. He appeared in several major Hollywood releases in 1995, including a starring role in the Robert Rodriguez-directed film, Desperado. In 1996, he starred alongside Madonna in Evita, an adaptation of the musical by Andrew Lloyd Webber and Tim Rice in which he played the narrator, Che, a role originally played on Broadway by Mandy Patinkin. He also made succes with his role as the legendary Mexican masked swordsman, Zorro in the 1998 film The Mask of Zorro, for which he was the first Spanish actor to portray the character after over 80 years since Zorro's creation.

Alongside of the movie Desperado, he has more recently collaborated with Robert Rodriguez who cast him in the Spy Kids film trilogy and the last installment of the "Mexico" trilogy Once Upon A Time In Mexico (in which he appeared with Johnny Depp). Banderas' debut as a director was the poorly-received Crazy in Alabama (1999), starring his wife Melanie Griffith.

In 2003, he returned to the musical genre, appearing to great acclaim in the Broadway revival of Maury Yeston's musical Nine, based on the film 8½, playing the prime role originated by the late Raúl Juliá. Banderas won both the Outer Critics Circle and Drama Desk awards, and was nominated for the Tony Award for best actor in a musical.[5] His performance is preserved on the Broadway cast recording released by PS Classics.

His voice role as Puss in Boots in Shrek 2 and Shrek the Third made the character popular on the family film circuit. In 2005, he reprised his role as Zorro in The Legend of Zorro, though this was not as successful as the original. In 2006, he starred in Take the Lead, a high school-set movie in which he played a real-life ballroom dancing teacher. That year, he directed his second film El camino de los ingleses (Summer Rain), and also received the L.A. Latino International Film Festival's "Gabi" Lifetime Achievement Award on 14 October.[6] He hosted Saturday Night Live's 600th episode (in season 31). The musical guest was Mary J. Blige. He performed a voice-over for a computer-animated bee which can be seen in the United States in television commercials for Nasonex,[7] an allergy medication, and was seen in the 2007 Christmas advertising campaign for Marks & Spencer, a British retailer.[8] He is being considered for the part of Hadrian in the in-production (as of February 2008) film Memoirs of Hadrian.[9]

He also received a star on the Hollywood Walk of Fame on 6801 Hollywood Blvd in 2005.

Banderas divorced his first wife, Ana G. Leza, and in May 1996 married actress Melanie Griffith,[10] whom he met a year earlier when they shot Two Much.[11] They have a daughter, Stella del Carmen Banderas, born in 1996, who appeared in the film Crazy in Alabama (1999), in which Griffith starred and which Banderas directed.[12]

He has invested his movie earnings in Andalusian products, which he promotes in Spain and the USA.[12] He owns 50% of a winery in Northern Spain called Anta Banderas which makes red and rose wines.[13]

While he speaks in his native Andalusian Spanish with his family and Spanish press, he switches to the Castilian pronunciation when playing non-Andalusian roles or when dubbing his Hollywood roles. He is a long time supporter of the Málaga CF[14] and Real Madrid Football Club.

This article uses material from the article Antonio Banderas from the free encyclopedia Wikipedia and it is licensed under the GNU Free Documentation License.

All This Time (Pick-Me-Up Song) Maria Mena
Update Required To play the media you will need to either update your browser to a recent version or update your Flash plugin.