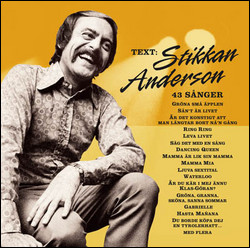 Anderson was the founder of the Polar Music record label in 1963. Initially beginning his career as a chemistry and mathematics teacher after leaving school at the age of 15,[1] Anderson soon entered the Swedish popular music scene, becoming a music producer, manager and also occasional performer.

Anderson had begun writing songs as early as 1951, and in 1959 he got his breakthrough with the song "Är du kär i mig ännu, Klas-Göran?" ("Are You Still In Love With Me, Klas-Göran?"), written for Swedish singer Lill-Babs. During the 1960s he was one of Sweden's most prolific songwriters, producing more than 3,000 published titles. Anderson also founded Sweden Music in 1960, as well as several other companies.

By the late 1960s, he was the manager and producer of Björn Ulvaeus and Benny Andersson, who would become the two main songwriters of ABBA. He joined the careers of these two after previously managing the Hootenanny Singers, of which Ulvaeus was a member. Later, in 1972, he began managing Anni-Frid Lyngstad, and finally in 1976 Agnetha Fältskog (until December 1975, Fältskog was still bound to Cupol/CBS Records under a contract). Prior to ABBA's formation, Björn and Benny were living in a Volkswagen bus and had decided to leave music and gain regular jobs; however, Anderson persuaded them to start a new band, investing considerable money in the group.

Before his time with ABBA, Anderson managed some of the biggest Swedish artists at that time, and had a huge number of hits on the Swedish charts. His success earned him the nickname "The Business" since he often had several artists in the Top 10 at any time with whom he had written, published, and recorded the songs. When requiring fresh ideas, Anderson would travel to New York, buy songs that had been American hits, and then translate or transcribe the lyrics on the return journey ready for a recording session shortly after and then have the record on the shelves within a few days. The number of songs sent to IFPI/ASCAP for copyright infringement reached over 9,000.

Frequently known as the fifth member of ABBA, besides contributing to the lyrics, he also owned the record label and the publishing company. Anderson gave shares in the company as gifts to Björn, Benny, and Michael B. Tretow out of friendship as the group became highly successful. Tretow worked on the mixing board and was the sound engineer for the group. According to PolarmusicPrize.org, Anderson's most treasured award was Billboard Magazine's "Trendsetter Award". Such a distinction had only been presented to one European before Anderson, and that was Brian Epstein, manager of The Beatles.

Anderson was one of the dominant figures behind ABBA, representing their commercial interests and global success through successful record deals. At the same time, he also managed the investment of funds and the enormous financial incomes of Polar Music, holding the majority of stocks. This was an agreement dating back to 1974, and a great deal of the money came from individual record deals he struck for the group, including a ground-breaking agreement for record sales in the Soviet Union in which ABBA recordings were released in exchange for barrels of oil. In the mid-1980s, a considerable part of ABBA's fortune was lost by mismanagement, bad investments, high demands for tax, and the rise of credit rates.

The contract with the performers, as well as the international distribution, ran from a standard publishing and recording deal involving identical contracts, rather than from one written specifically with the performers of the band. This led to problems later, when three of the four ABBA members terminated their relationship with Anderson when it was revealed that Anderson had used this contract to take a percentage of profits at a value of 4.5 million euros over the course of many years. A complaint against Anderson was submitted to the Stockholm District Court in June 1990 by Agnetha Fältskog's company Agnetha Fältskog Produktion AB, Benny Andersson's company Mono Music AB, as well as a Dutch company holding Björn Ulvaeus's rights. The dispute was eventually settled out of court in July 1991; the terms of the settlement remain undisclosed.

In 1982 Anni-Frid Lyngstad had sold all the shares in the Polar Music company given to her by Anderson, as she moved abroad. For unknown reasons she remains the only member never to seek legal recourse for past royalty fees. She was not involved in any way with the legal proceedings against Anderson.

In 1989, Anderson made a substantial financial endowment to found the Polar Music Prize from money he made when he sold the multi-million-dollar record company Polar Records. In this deal nearly all utilisation and license rights, and the registered ABBA trademark, were sold for an unknown sum of money to PolyGram shortly before the ABBA members took him to court over royalty back payments. Previously, Anderson had licenced ABBA and the members' solo releases to various labels worldwide as a way to earn more royalties. In 1998, PolyGram was in turn sold to Seagram and merged into what is now one of the Big Four record labels, the Universal Music Group, the company that today holds the rights to the entire ABBA back catalogue.

Stig Anderson was married to Gudrun Anderson, and had two sons, Anders and Lasse, and a daughter Marie. His daughter, Marie Ledin (wife of Swedish star and ABBA concert backing vocalist Tomas Ledin) was also involved in the music industry. In the mid-1980s she started a new, highly successful record label called Record Station (sold to German BMG in the early 1990s), followed by Anderson Records. Anderson Records released Anni-Frid Lyngstad's Swedish comeback album Djupa andetag in 1996, as well as Michael B. Tretow's Greatest Hits in 1999.

On 12 September 1997, at the age of 66, Stig Anderson died of a heart attack.[2] His funeral was broadcast live by Sveriges Television, an honour generally only reserved for distinguished statesmen or royalty.

This article uses material from the article Stig Anderson from the free encyclopedia Wikipedia and it is licensed under the GNU Free Documentation License.

You'll Be A Part Of Me Bruno Flavio Marti
Update Required To play the media you will need to either update your browser to a recent version or update your Flash plugin.