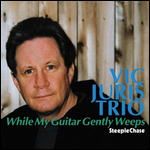 His song "Horizon Drive" was sampled by Gang Starr in 1994 for the song "Mass Appeal" though Juris was not paid for its use.

Juris has held teaching positions at The New School for Jazz and Contemporary Music, Mason Gross School of the Arts, William Paterson University and Lehigh University.

This article uses material from the article Vic Juris from the free encyclopedia Wikipedia and it is licensed under the GNU Free Documentation License.

There's Something In Your Eyes Pearlbreakers
Update Required To play the media you will need to either update your browser to a recent version or update your Flash plugin.