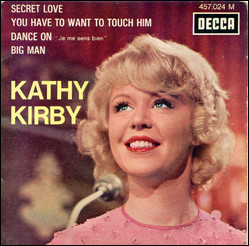 Kathy Kirby (born Kathleen O'Rourke; 20 October 1938  19 May 2011[1]) was an English singer, reportedly the highest-paid female singer of her generation.[2] She is best known for her cover version of Doris Day's "Secret Love" and for representing the United Kingdom in the 1965 Eurovision Song Contest, finishing in second place.[3] Her physical appearance often drew comparisons with Marilyn Monroe. She peaked in popularity in the 1960s, when she was one of the best-known and most recognised personalities in British show business.[4]

Kirby was born in Ilford, Essex.[1] She was the eldest of three children of Irish parents. Her mother Eileen brought them up alone after their father left early in their childhood.[5] Kirby grew up in Tomswood Hill, Barkingside, near Ilford and attended the Ursuline Convent School in Ilford, where she sang in the choir.[6]

Kirby's vocal talent became apparent early in life, and she took singing lessons with a view to becoming an opera singer.[7] She became a professional singer after meeting bandleader Bert Ambrose at the Ilford Palais in 1956. She remained with Ambrose's band for three years and he remained her manager, mentor and lover until his death on stage in Leeds in 1971.[2]

During the summer of 1957 Kathy performed at the Florida Park Restaurant in Madrid, Spain, and after returning to the UK not only performed with Ambrose's orchestra, but also with Nat Allen and his band.[4] In 1959 Kirby joined vocalists Tony Mansell and Rikki Henderson in the Denny Boyce Band, and appeared regularly at the Lyceum Ballroom in London.[4] In the summer of 1959 she made her solo cabaret debut at the Astor Club, and was subsequently signed to Pye Records in 1960, releasing two singles "Love Can Be" and "Now You're Crying", which sold few copies but helped her getting a six month contract at Mayfair's Blue Angel nightclub.[4] She adopted the look of a "blonde bombshell", and was compared to Marilyn Monroe.

In 1962 she signed a contract with Decca Records, and released her first single "(He's a) Big Man" in October, 1962. The single sold well over a long period of time, but failed to reach the top of the British charts.[4] It was, however, a hit in Vancouver's CFUN in January, 1963.[8] In the summer of 1963 she had her first hit, after becoming a regular on the musical TV program "Stars and Garters", the record being Dance On!, which peaked at #11 in the UK and #1 in Australia.[9] Its follow-up was an upbeat reworking of the Doris Day classic Secret Love, which peaked at #3 on the British charts and stayed there for about 5 months.[4] In the same year she won Top British Female Singer in the New Musical Express poll. Her album "16 Hits From Stars & Garters" was released in the end of 1963, and cracked the top 20.[4] The single Let Me Go, Lover!, another upbeat reworking, this time of the classic by Joan Weber, reached the #10 spot in early 1964. Kirby disliked the song, stating that: "Honestly, I was really surprised because I never had much hope for this record, and when I recorded it I thought it might never get anywhere at all."[4]

Let Me Go, Lover! was followed by You're The One, which peaked at #17 in May 1964. This success was followed by a record breaking summer season show at the ABC Theatre in Blackpool.[4]

Kirby became one of the biggest stars of the early to mid-1960s, appearing in the Royal Command Variety Performance and three television series for BBC TV. She represented the United Kingdom in the Eurovision Song Contest in 1965, and came second with the song "I Belong". Author and historian John Kennedy O'Connor describes Kirby's "I Belong" as being far more representative of current musical tastes than other songs from the contest,[10] but she was beaten by France Gall from Luxembourg, singing an even more contemporary song written by Serge Gainsbourg. An EP was issued featuring the six songs selected for the Eurovision Contest, featuring a different version of "I Belong", which peaked at #10 in 1965.[4] She also sang the theme tune of the BBC television series Adam Adamant Lives!.

After the chart success of "I Belong", Kirby recorded more than a dozen singles between 1965 and 1967, but they all failed to chart.[14] She continued to make television appearances, and her 1974 appearance on The Wheeltappers and Shunters Social Club TV variety show is available to watch on YouTube.[15]

During the 1970s Kirby's singing career was eclipsed by a turbulent personal life, but she made occasional television appearances and performed a few live concerts on the "nostalgia circuit". On 31 December 1976, she performed her hit song "Secret Love" on BBC1's A Jubilee Of Music, celebrating British pop music for Queen Elizabeth II's impending Silver Jubilee.

In December 1983 she gave one last concert in Blackpool, then retired from show business altogether.[16]

She did not perform in public after her retirement, but an amateur recording of Kirby singing the song "He", made in about 2005, is available online.

Interest in Kirby and her work continued long after she stopped performing,[17] particularly among gay men, for whom she was something of an icon.[18] In her last decade, she recorded short greetings for her official website.[7] A biography was published in 2005, and there was a 2008 stage show about her life, written and produced by Graham Smith, called Secret Love. Smith re-wrote the show for the 2012 Haworth Festival, entitling it: Dance On: The Kathy Kirby Story.[19]

The Daily Express reported in 2008 that plans for a new filmed interview had been abandoned, but later reports confirmed that the interview had been filmed, and it was subsequently included on a DVD compilation released the following year. She also gave an interview to the Express in 2009, which included recent photographs and was billed as her first in 26 years.[20]

Following the 2009 interview, the Sunday Express reported that some previously unreleased recordings would be made available on CD in 2010, and that Kirby had been approached to appear on Desert Island Discs,[21] although neither the programme nor the CD has been released.

Kirby met Ambrose in her teens and, despite the 42-year age gap and his having an estranged wife at the time,[5] began a relationship with him that lasted until his death in 1971.[22] In the 2009 interview, she said she had had an affair with Bruce Forsyth during this time.[22]

Kirby was married briefly to writer and former London policeman Frederick Pye in the 1970s.[1][2] Following her bankruptcy in 1975, and a court case following an arrest over an unpaid hotel bill, she was referred to St Luke's psychiatric hospital in London in 1979.[16] Following her discharge, she had a live-in[16] lesbian relationship with a fan, Laraine McKay, and said that they intended to marry. McKay was imprisoned for fraud and forgery.[22][23] In the early 1980s, Kirby had relationships with musician David Cross[24] and lawyer Alan Porter.[20][25]

Kirby was diagnosed with schizophrenia[22] and was in poor physical and mental health for much of her life. Following her retirement, she lived in a series of apartments and hotels in West London, settling in an apartment in Emperor's Gate, South Kensington, surviving on state benefits and some royalties, and maintaining what has been called a "Garbo-esque" seclusion. Very shortly before her death, Kirby moved to Brinsworth House in Twickenham at the insistence of her niece, Sarah, Lady Thatcher, wife of Mark Thatcher. Another niece, Claudia, became Lady Rothermere after marrying Viscount Rothermere.[26]

Kirby died on 19 May 2011, a few days after moving to Brinsworth House. According to a message posted by a relative on a fan website, Kirby suffered a heart attack.[27] She was survived by her sister Pat, and her brother Douglas.[5]

This article uses material from the article Kathy Kirby from the free encyclopedia Wikipedia and it is licensed under the GNU Free Documentation License.

Mr. Young Bench
Update Required To play the media you will need to either update your browser to a recent version or update your Flash plugin.