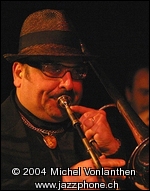 Valente was born in Worcester, Massachusetts and studied at New England Conservatory of Music with John Coffey and Jaki Byard.[1]

He has recorded and performed extensively with Carla Bley and many of her regular associates such as Andy Sheppard. Valente is known for his highly characteristic raucous rasping tone.

Valente played the trombone solo on the instrumental track "The Lord is Listening to Ya, Hallelujah!" on Carla Bley's 1982 album Live!.[2]

This article uses material from the article Gary Valente from the free encyclopedia Wikipedia and it is licensed under the GNU Free Documentation License.

Baby Take Me Home Jessie & The Gents
Update Required To play the media you will need to either update your browser to a recent version or update your Flash plugin.