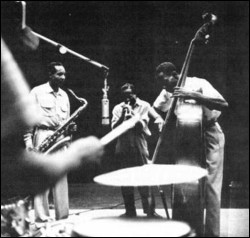 Although most closely associated with Max Roach and Clifford Brown, Morrow also appears on recordings by Sonny Rollins and Sonny Stitt.

After leaving the military, he played with Charlie Parker, Sonny Criss, Teddy Edwards, Hampton Hawes and other musicians who were in L.A. Morrow then spent five years in San Francisco (1948-53), often appearing at Bop City and working with Dexter Gordon, Wardell Gray, Billie Holiday and Sonny Clark, among others.[1]

According to Roach, Morrow had been "free-lancing around San Francisco clubs" when they hired him to play with them after having rejecting two other bassists.[3] He appeared all of the studio albums made the Clifford Brown-Max Roach Quintet. After that band dissolved due to the deaths of Brown and Richie Powell, Morrow continued recording with Max Roach's band. He also worked with Anita O'Day in the 1970s before joining the Disney World house band in 1976. He never led his own recording date.

With Clifford Brown and Max Roach

This article uses material from the article George Morrow (bassist) from the free encyclopedia Wikipedia and it is licensed under the GNU Free Documentation License.

Falling Down Sara McLoud
Update Required To play the media you will need to either update your browser to a recent version or update your Flash plugin.