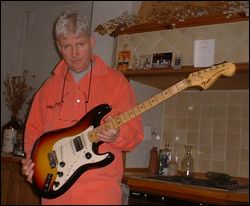 Educated at Robin Hill Secondary Modern and Breeze Hill School, Lees had no formal musical education, but took up playing the guitar when he was fourteen. Lees went on to study at Oldham School Of Art, where he met Stuart 'Woolly' Wolstenholme in 1964. They played together in The Sorcerers, playing Eddie Cochran-style rock and roll, and in The Blues Keepers, before forming Barclay James Harvest in 1967. He recorded a solo album, A Major Fancy, in 1972, but the release of this was tied up when the band changed record label. It was not released until 1977.[1] He also recorded a solo single for Polydor in 1974, a cover of The Eagles track "Best of My Love".[1] In 1998, musical differences saw the members of Barclay James Harvest agree to take a sabbatical. Lees again met up with Wolstenholme and formed Barclay James Harvest Through The Eyes of John Lees, and this band became John Lees' Barclay James Harvest.

Lees worked as a Music Technician at Crompton House Church of England High School, involved with the production of the GCSE and A Level students' Music and Music Technology coursework from 2006 until 2012, when he retired. He was often involved in musical productions. Lees also enjoys reading, his favourite books being Graham Greenes "A Burnt Out Case", science fiction novels (especially those of Ray Bradbury) and poetry. His hobbies include photography and amateur radio. Lees currently lives in Saddleworth, a civil parish in the Metropolitan Borough of Oldham with his wife, Olwen, and they have two children, Esther Jane (born 28 July 1980) and John Joseph (who shares his fathers birthday, being born on 13 January 1986), plus various pets including an African Grey Parrot called Fritz.[4]

This article uses material from the article John Lees (musician) from the free encyclopedia Wikipedia and it is licensed under the GNU Free Documentation License.

Se ti potessi dire Vasco Rossi
Update Required To play the media you will need to either update your browser to a recent version or update your Flash plugin.