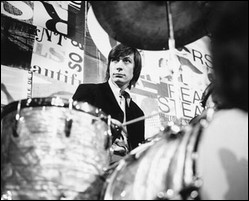 Charles Robert Watts (born 2 June 1941) is an English drummer, best known as a member of the Rolling Stones. Originally trained as a graphic artist, he started playing drums in London’s rhythm and blues clubs, where he met Brian Jones, Mick Jagger, and Keith Richards. In 1963, he joined their group, the Rolling Stones, as drummer, while doubling as designer of their record sleeves and tour stages. He has also toured with his own group, the Charlie Watts Quintet, and appeared in London at Ronnie Scott's Jazz Club with the Charlie Watts Tentet.

In 2006, Watts was elected into the Modern Drummer Hall of Fame; in the same year, Vanity Fair elected him into the International Best Dressed List Hall of Fame. In the estimation of noted music critic Robert Christgau, Watts is "rock's greatest drummer." In 2016, he was ranked 12th on Rolling Stone's "100 Greatest Drummers of All Time" list.[1]

Charles Robert "Charlie" Watts was born to Charles Richard Watts, a lorry driver for the London Midland & Scottish Railway, and his wife Lillian Charlotte (née Eaves),[2] at University College Hospital, London, and raised (along with his sister Linda) in Kingsbury. He attended Tylers Croft Secondary Modern School from 1952 to 1956; as a schoolboy, he displayed a talent for art, cricket and football.[3]

As a child, Watts lived in Wembley, at 23 Pilgrims Way.[4] Many of Wembley’s houses had been destroyed by German bombs during World War II; Watts and his family lived in a prefabricated home, as did many in the community.[4] Watts's neighbour Dave Green, who lived next door at 22 Pilgrims Way,[4] was a childhood friend, and they remain friends today; Green went on to become a jazz bass player. Green recalls that as boys, "we discovered 78rpm records. Charlie had more records than I did... We used to go to Charlie's bedroom and just get these records out."[5] Watts' earliest records were jazz recordings; he remembers owning 78 RPM records of Jelly Roll Morton, and Charlie Parker.[5] Green recalls that Watts also "had the one with Monk and the Johnny Dodge Trio. Charlie was ahead of me in listening and acquisitions."[5] When Watts and Green were both about thirteen, Watts became interested in drumming:[5]

I bought a banjo, and I didn't like the dots on the neck. So I took the neck off, and at the same time I heard a drummer called Chico Hamilton, who played with Gerry Mulligan, and I wanted to play like that, with brushes. I didn't have a snare drum, so I put the banjo head on a stand.[5]

Green and Watts began their musical careers together from 1958 to 1959, playing in a jazz band in Middlesex called the Jo Jones All Stars.[5]

Watts initially found his transition to rhythm and blues puzzling; commenting, "I went into rhythm and blues. When they asked me to play, I didn't know what it was. I thought it meant Charlie Parker, played slow.[5]

Watts' parents gave him his first drum kit in 1955; he was interested in jazz, and would practice drumming along with jazz records he collected.[6] After completing secondary school, he enrolled at Harrow Art School (subsequently absorbed by the University of Westminster), which he attended until 1960. After leaving school, Watts worked as a graphic designer for an advertising company called Charlie Daniels Studios, and also played drums occasionally with local bands in coffee shops and clubs. In 1961 he met Alexis Korner, who invited him to join his band, Blues Incorporated.[7] At that time Watts was on his way to a sojourn working as a graphic designer in Denmark, but he accepted Korner's offer when he returned to London in February 1962.[8]

Watts played regularly with Blues Incorporated and maintained a job with another advertising firm of Charles, Hobson and Grey. It was in mid-1962 that Watts first met Brian Jones, Ian "Stu" Stewart, Mick Jagger, and Keith Richards, who also frequented the London rhythm and blues clubs, but it was not until January 1963 that Watts finally agreed to join the Rolling Stones.[9]

Besides his music, Watts contributed graphic art to early Rolling Stones records such as the Between the Buttons record sleeve and was responsible for the 1975 tour announcement press conference in New York City. The band surprised the throng of waiting reporters by driving and playing "Brown Sugar" on the back of a flatbed truck in the middle of Manhattan traffic, a gimmick AC/DC copied later the same year. (Status Quo repeated the trick for the 1984 video to "The Wanderer" and U2 would later emulate it in the 2004 video for "All Because of You".) Watts remembered this was a common way for New Orleans jazz bands to promote upcoming dates. Moreover, with Jagger, he designed the elaborate stages for tours, first contributing to the lotus-shaped design of that 1975 Tour of the Americas, as well as the 1989–1990 Steel Wheels/Urban Jungle Tour, the 1997 Bridges to Babylon Tour, the 2002–2003 Licks Tour, and the 2005–2007 A Bigger Bang Tour.

Watts has been involved in many activities outside his life as a member of The Rolling Stones. In 1964, he published a cartoon tribute to Charlie Parker entitled Ode to a High Flying Bird. Although he has made his name in rock, his personal tastes lie principally in jazz. In the late 1970s, he joined Ian Stewart in the back-to-the-roots boogie-woogie band Rocket 88, which featured many of the UK's top jazz, rock and R&B musicians. In the 1980s, he toured worldwide with a big band that included such names as Evan Parker, Courtney Pine and Jack Bruce, who was also a member of Rocket 88. In 1991, he organised a jazz quintet as another tribute to Charlie Parker. 1993 saw the release of Warm And Tender, by the Charlie Watts Quintet,[10] which included vocalist Bernard Fowler. This same group then released Long Ago And Far Away in 1996. Both records included a collection of Great American Songbook standards. After a successful collaboration with Jim Keltner on The Rolling Stones' Bridges to Babylon, Watts and Keltner released a techno/instrumental album simply titled, Charlie Watts/Jim Keltner Project. Watts stated that even though the tracks bore such names as the "Elvin Suite" in honour of the late Elvin Jones, Max Roach and Roy Haynes, they were not copying their style of drumming, but rather capturing a feeling by those artists. Watts at Scott's was recorded with his group, "the Charlie Watts Tentet",[10] at the famous jazz club in London, Ronnie Scott's. In April 2009 he started to perform concerts with the ABC&D of Boogie Woogie together with pianists Axel Zwingenberger and Ben Waters plus his childhood friend Dave Green on bass.

In 1989, The Rolling Stones were inducted into the Rock and Roll Hall of Fame. In the July 2006 issue of Modern Drummer magazine, Watts was voted into the Modern Drummer Hall of Fame, joining Ringo Starr, Keith Moon, Steve Gadd, Buddy Rich and other highly esteemed and influential drummers from the history of rock and jazz.[11] In the estimation of noted music critic Robert Christgau, Watts is "rock's greatest drummer."[12]

On 14 October 1964, Watts married Shirley Ann Shepherd (born 11 September 1938), whom he had met before the band became successful. The couple have one daughter, Serafina, born in March 1968, who in turn has given birth to Watts' only grandchild, a girl named Charlotte.

Watts has expressed a love–hate attitude toward touring. When he appeared on the BBC's Radio 4 Desert Island Discs,[13] in February 2001, he said that he has had a compulsive habit for decades of sketching every new hotel room he occupies – and its furnishings. He stated that he keeps every sketch, but still doesn't know why he feels the compulsion to do this.

Watts' personal life has outwardly appeared to be substantially quieter than those of his bandmates and many of his rock-and-roll colleagues; onstage, he seems to furnish a calm and amused counterpoint to his flamboyant bandmates. Ever faithful to his wife Shirley, Watts consistently refused sexual favours from groupies on the road; in Robert Greenfield's STP: A Journey Through America with The Rolling Stones, a documentary of the 1972 American Tour, it is noted that when the group was invited to the Playboy Mansion during that tour, Watts took advantage of Hugh Hefner's game room instead of frolicking with the women. "I've never filled the stereotype of the rock star," he remarked. "Back in the '70s, Bill Wyman and I decided to grow beards, and the effort left us exhausted."[14]

Watts has spoken openly about a period in the mid-1980s when his previously moderate use of alcohol and drugs became problematic: "[My drug and alcohol problems were] my way of dealing with [family problems]... Looking back on it, I think it was a mid-life crisis. All I know is that I became totally another person around 1983 and came out of it about 1986. I nearly lost my wife and everything over my behaviour".[15]

One anecdote relates that in the mid-1980s, an intoxicated Jagger phoned Watts' hotel room in the middle of the night asking "Where's my drummer?". Watts reportedly got up, shaved, dressed in a suit, put on a tie and freshly shined shoes, descended the stairs, and punched Jagger in the face, saying: "Don't ever call me your drummer again. You're my fucking singer!"[16]

Watts is noted for his personal wardrobe: the British newspaper The Daily Telegraph has named him one of the World's Best Dressed Men. In 2006, Vanity Fair elected Watts into the International Best Dressed List Hall of Fame.[17]

In June 2004, Watts was diagnosed with throat cancer, despite having quit smoking in the late 1980s, and underwent a course of radiotherapy. The cancer has since gone into remission, and he returned to recording and touring with The Rolling Stones.

Watts now lives in Dolton, a rural village in west Devon, where he and wife Shirley own an Arabian horse stud farm.[18] He also owns a percentage of The Rolling Stones' various corporate entities.

In addition to his work with The Rolling Stones, Watts has released the following albums:

This article uses material from the article Charlie Watts from the free encyclopedia Wikipedia and it is licensed under the GNU Free Documentation License.

Do We Think At All Lina Button
Update Required To play the media you will need to either update your browser to a recent version or update your Flash plugin.