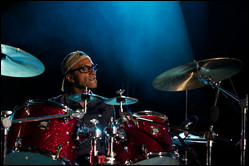 Manu Katché (born 27 October 1958) is a French drummer and songwriter.

Katché was born in Saint-Maur-des-Fossés. He performed on several successful albums in the mid-1980s such as Peter Gabriel's 1986 album So and Sting's …Nothing Like the Sun and The Soul Cages. Since then he has featured in the pop, rock and world music scenes playing with numerous bands and artists, including Afro Celt Sound System, Jeff Beck, Al Di Meola, Tears for Fears, Eurythmics, Simple Minds, Dire Straits, Laurent Voulzy, Jeanne Mas, Mike Lindup, Jan Garbarek, Mango, Manu Chao, Loreena McKennitt, Youssou N'Dour, Robbie Robertson, Joan Armatrading, Joe Satriani, Tori Amos, Richard Wright, Kyle Eastwood, the Christians, Ryuichi Sakamoto and the aforementioned Peter Gabriel and Sting, with whom he has also toured extensively. Manu has also worked with Zlatan Stipišić Gibonni, a Croatian singer, on his albums Mirakul (2001) and Unca Fibre (2006), and has toured with Gibonni supporting the two albums.

He played drums on all tracks except one on Tracy Chapman's 1992 release Matters of the Heart.

In 1992, Katché released his first solo album, It's About Time, largely in the rock genre, with guest musicians like Daniel Lanois, David Rhodes, Peter Gabriel, David Sancious, Branford Marsalis and Sting. His subsequent solo releases have all been jazz. He released his second solo album on September 12, 2005 entitled Neighbourhood, which features Jan Garbarek on saxophone, Tomasz Stanko on trumpet, Marcin Wasilewski on piano and Slawomir Kurkiewicz on double bass. His second ECM album, Playground was released in September 2007. In March 2010, Katché released Third Round, again on ECM.

From 2003 to 2007, along with producer Dove Attia, composer André Manoukian and singer Marianne James, he was one of the four judges in the TV-show Nouvelle Star, the French version of Idol series. He was the most feared of them for his wit and his severe judgment about the groove and the rhythm of the singing contestants.

Since January 2008, Katché has hosted the monthly program One Shot Not[1] on Arte.

In 2010 Katché composed the instrumental music for the six themed lands of the Belgian theme park Bellewaerde. An album, with the twelve compositions for the park, including music for the Mexican, western, Indian and Canadian areas, was sold in souvenir shops at the park.

With Tears for Fears

This article uses material from the article Manu Katché from the free encyclopedia Wikipedia and it is licensed under the GNU Free Documentation License.

Stay Bastian Baker
Update Required To play the media you will need to either update your browser to a recent version or update your Flash plugin.