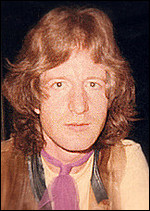 Peter William Ham (27 April 1947 24 April 1975) was a Welsh singer, songwriter and guitarist, best known as the leader of the group Badfinger.

Ham was born in Swansea, Wales. He formed a local rock group called The Panthers around 1961. This group would undergo several name and lineup changes before it became The Iveys in 1965. The band was relocated to London by The Mojos manager, Bill Collins, in 1966, and they continued to perform for three years throughout the United Kingdom. As it was, Ham eventually became the prominent songwriter for the band, as a Revox was made available by Collins to encourage him. Ray Davies of The Kinks took an initial interest in the group, although tracks produced by Davies did not surface commercially until decades later. In 1968, The Iveys came to the attention of Mal Evans (The Beatles personal assistant) and were eventually signed to the Beatles' Apple label after approval from all four Beatles, who were reportedly impressed by the band's songwriting abilities.[1]

The Iveys changed their name to Badfinger with the single release of "Come And Get It," a composition written by Paul McCartney, and it became a worldwide Top Ten hit. Ham had initially protested against using a non-original to promote the band, as he had gained confidence in the group's compositions, but he was quickly convinced of the springboard effect of having a likely hit single. His own creative perseverance paid off eventually, as his "No Matter What" composition became another Top Ten worldwide hit after its release in late 1970 . He followed up writing two more worldwide hits with "Day After Day" and "Baby Blue." His greatest songwriting success came with his co-written composition "Without You" - a worldwide #1 when covered by Harry Nilsson and released in 1972. The song has since become a ballad standard and is covered by hundreds of singers from many genres worldwide. An Ivor Novello award for Song Of The Year was issued in 1973 along with Grammy nominations. In 1972, Ham's group Badfinger was picked up by Warner Bros. Records, as the Apple label was crumbling and it seemed the band was primed for major recognition.[1]

During the Warner Bros. Records era from 197375, Badfinger became embroiled in many internal, financial and managerial problems and their music was stifled. By 1975, with no income and the band's business manager non-communicative, Ham became despondent and he hanged himself in the garage of his Surrey home. His blood alcohol was .27%. He was 27 years old. He left behind a pregnant girlfriend (his daughter was born one month after his death). Ham was a sensitive man. His suicide note had the statement "I will not be allowed to love and trust everybody. This is better." And an accusatory blast toward Badfinger's business manager, Stan Polley, with Ham writing: "P.S. Stan Polley is a soulless bastard. I will take him with me." Others of Polley's artist and business clients accused him of corruption over the years. News of Ham's death was not widely disseminated at the time, as no public comment was made by The Beatles, Apple Corps Ltd or Warner Bros. Records.[1]

Ham is often credited as being one of the earliest purveyors of the power pop genre, but his most widespread effect in popular music is the ballad "Without You," written with Badfinger bandmate Tom Evans (who also later committed suicide). Two collections of Ham's home demo recordings have been posthumously released: 1997's 7 Park Avenue and 1999's Golders Green.[1]

(with Badfinger, except where noted)

Ham also appeared as a guest artist on

This article uses material from the article Peter Ham from the free encyclopedia Wikipedia and it is licensed under the GNU Free Documentation License.