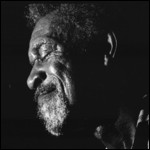 Luther Allison (August 17, 1939 – August 12, 1997)[1][2] was an American blues guitarist. He was born in Widener, Arkansas, and moved with his family to Chicago in 1951.[3] He taught himself guitar and began listening to blues extensively. Three years later he began hanging around outside blues nightclubs with the hopes of being invited to perform. He played with Howlin' Wolf's band and backed James Cotton.

Allison's big break came in 1957, when Howlin' Wolf invited him to the stage. Freddie King took Allison under his wing, and after King got a record deal, Allison took over his gig in the house band of a club on Chicago's West Side. He worked the club circuit in the late 1950s and early 1960s and recorded his first single in 1965. He signed a recording contract with Delmark Records in 1967 and released his debut album, Love Me Mama, the following year. He performed a well-received set at the 1969 Ann Arbor Blues Festival and as a result was asked to perform there in each of the next three years.[3] He toured nationwide. In 1972, he signed with Motown Records, one of the few blues artists on that label.[4] In the mid-1970s he toured Europe. He moved to France in 1977.[4]

Allison was known for his powerful concert performances, lengthy soulful guitar solos and crowd walking with his Gibson Les Paul. He lived briefly during this period in Peoria, Illinois, where he signed with Rumble Records, releasing two live recordings, "Gonna Be a Live One in Here Tonight", produced by Bill Knight, and "Power Wire Blues", produced by George Faber and Jeffrey P. Hess. Allison played the bar circuit in the United States during this period and spent eight months of the year in Europe at high-profile venues, including the Montreux Jazz Festival. In 1992, he performed with the French rock and roll star Johnny Hallyday in 18 shows in Paris, also playing during the intermission.

During his tour in the summer of 1997, Allison checked into a hospital for dizziness and loss of coordination. It was discovered that he had a tumor on his lung that had metastasized to his brain.[5] In and out of a coma, Allison died on August 12, 1997, five days before his 58th birthday, in Madison, Wisconsin.[3] His album Reckless had just been released.

His son Bernard Allison, at one time a member of his band, is now a solo recording artist. Bernard, the youngest of nine siblings, was exposed to all kinds of music by his father. The younger Allison made his first venture into the music business at age 13, when he performed on a live album with his father.[6]

Allison was posthumously inducted into the Blues Hall of Fame in 1998. In 2000, the Chicago Sun-Times called him "the Bruce Springsteen of the blues".[7] He was a strong influence on many young blues guitarists, such as Chris Beard[8] and Reggie Sears.[9]

This article uses material from the article Luther Allison from the free encyclopedia Wikipedia and it is licensed under the GNU Free Documentation License.

Dreamer Paradisia
Update Required To play the media you will need to either update your browser to a recent version or update your Flash plugin.