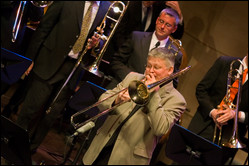 Mark Daryl Nightingale (born May 29, 1967) is an English jazz trombonist.

Nightingale was born in Evesham. He began on trombone at age nine, and played in the Midland Youth Jazz Orchestra and the National Youth Jazz Orchestra in his teens. He attended Trinity College of Music from 1985-88. He performed at the 1989 International Trombone Workshop with a trombone quintet called Bonestructure; following this he was asked to return to play at workshops in Germany in 1992, in the U.S. in 1994, and in Austria in 1996. Nightingale toured and recorded with James Morrison in Europe from 1994 to 1997. He has also composed for trombone; published works include 20 Jazz Etudes (1995) and Multiplicity (1996).

This article uses material from the article Mark Nightingale from the free encyclopedia Wikipedia and it is licensed under the GNU Free Documentation License.