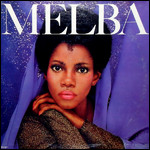 Her mother, Bonnie Davis, had a No. 1 R&B hit with "Don't Stop Now", prior to Melba's birth. Although her biological father was Big Band leader and saxophonist Teddy Hill, it was her stepfather Moorman (who played on "Don't Stop Now") who became a prime influence and encouragement in Moore's musical pursuits, insisting that she learn to play the piano. When she graduated from college she worked as a music teacher, but she soon decided to pursue the spotlight.

Moore began her recording career in 1967, cutting the track "Magic Touch" which was left unreleased until 1986. It has become an enormous track on the Northern Soul Scene, eventually leading to Moore performing it live in 2009 at the Baltic Soul Weekender 3 in Germany north of Hamburg. She began her performing career in 1967 as Dionne in the original cast of the musical Hair along with Ronnie Dyson and Diane Keaton.

Moore replaced Keaton in the role of Sheila. In 1970, she won a Tony Award for Best Performance by a Featured Actress in a Musical for her portrayal of Lutiebelle in Purlie. She would not return to Broadway until 1978 when she appeared (as Marsinah) with Eartha Kitt in Timbuktu! but left the show after a few weeks and was replaced by Vanessa Shaw.

Following the success of Purlie, Moore landed two big-screen film roles, released two successful albums, 1970's I Got Love and Look What You're Doing to the Man, and co-starred with actor Clifton Davis in the then-couple's own successful variety television series in 1972. Both Moore and Davis revealed that the show was canceled after its brief run when their relationship ended. When Moore's managers and accountants left her in 1973, she returned to Newark and began singing in benefit concerts. Her career picked up after she met record manager and business promoter Charles Huggins after a performance at the Apollo Theater in 1974. They married in 1975.

In 1975 Moore signed with Buddah Records and released the critically successful R&B album, Peach Melba, which included the minor hit, "I Am His Lady". The following year she scored her first significant hit with the Van McCoy-penned "This Is It", which reached the Billboard Hot 100, the top-20 position on the R&B chart, and top-10 in the UK, becoming her biggest success in that country. 'This is It' also became the number 1 disco track in the UK for that year. It would be 18 years later that Australian singer Dannii Minogue will cover this song and make it to number 10 on the ARIA charts.

In 1976 she scored her third Grammy nomination with the R&B ballad "Lean on Me", which had been recorded originally by Vivian Reed and later by Moore's idol Aretha Franklin who recorded the song as a B-side to her 1971 hit "Spanish Harlem". The song is most notable for Moore's extended long note at the end. In 1983 she re-recorded the song as a tribute to McCoy, who had died four years earlier. Throughout the rest of the 1970s, Moore struggled to match the success of "This Is It" with minor R&B/dance hits. However, her hit 'Pick me up I'll dance' released in May 1979 produced by McFadden & Whitehead and released on Epic Records did have considerable UK disco success, reaching UK chart position 48, along with a further hit that same year, also produced by McFadden & Whitehead with a cover version of the Bee Gees' hit "You Stepped Into My Life", which reached the top 20 on the R&B charts and 47 on the Billboard Hot 100.

In 1981 Moore signed with Capitol Records and reached the top 5 on the R&B charts with the dance-pop/funk single "Love's Comin' At Ya", which also hit the top 20 in the UK (on EMI America EA 146) and became a sizable hit in some European countries for its post-disco sound and followed by "Mind Up Tonight", which was another top 40 hit in the UK reaching position number 22. A string of R&B hits followed, including 1983's "Keepin' My Lover Satisfied" and "Love Me Right", 1984's "Livin' For Your Love", 1985's "Read My Lips"—which later won Moore a fourth Grammy nomination for Best Female Rock Vocal Performance, making her just the third black artist after Donna Summer and Michael Jackson to be nominated in the rock category—and 1985's "When You Love Me Like This".

In 1986, she scored two number 1 R&B hits, including the duet "A Little Bit More" with Freddie Jackson and "Falling". She scored other popular R&B hits including "Love the One I'm With (A Lot of Love)" and "It's Been So Long". In 1986, Moore also headlined the CBS television sitcom Melba; its debut aired the same night as the Challenger explosion and the show was abruptly cancelled, though five episodes aired that summer. Her success began to wane as the decade closed, although she managed two further Top 10 R&B hits, "Do You Really (Want My Love)" and "Lift Every Voice and Sing". Moore had a starring role in the 1990 horror film Def by Temptation.

Moore returned to Broadway in 1995 landing a part in Les Misérables. A year later, she started her long-running one-woman show, Sweet Songs of the Soul, later renamed I'm Still Standing. In 2003, Moore was featured in the film, The Fighting Temptations, which starred Cuba Gooding, Jr. and Beyoncé Knowles. In 2007, she landed a role in the Broadway revival of Ain't Misbehavin'. In 2009 independent label Breaking Records released the EP Book of Dreams, in which Moore was featured. That same year Moore told her life story on TV-One's Unsung and later that year released her first R&B album in nearly 20 years, a duet with Phil Perry called The Gift of Love. Her song called "Love Is" debuted on the R&B charts in 2011 at #87.

Moore, a born-again Christian, engaged in a four-year relationship with television star Clifton Davis.[8] Davis later admitted that the relationship didn't work due to his drug abuse and mistreatment of Moore.[9]

In 1975 Moore married Charles Huggins and the two formed Hush Productions. After 15 years of marriage, in 1991, Huggins abruptly divorced Moore leaving the singer in financial ruins.[10] In 1999, Huggins filed suit against Moore claiming that she had defamed him in the public as she stated that he abused her economically.[11][12]

In addition to her Tony Award, her music career brought additional accolades. She was nominated for a Grammy Award in 1971 for 'Best New Artist'. Her 1975 second album, Peach Melba, saw her get a Grammy nomination. In 1976, she earned another Grammy nomination for Best Rhythm & Blues Vocal Performance - Female for the song "Lean on Me",.[13]

Moore was also nominated for Best Female Rock Vocal in 1986 for "Read My Lips". Moore is also the 2012 Recipient of the Atlanta Black Theatre Festival Theatre Legend Award. Moore was inducted into the Official Rhythm & Blues Music Hall of Fame on October 4, 2015, in Detroit.

Ms. Moore stars in the Westcoast Black Theatre Troupe's production of "Lady Day at Emerson's Bar and Grill" to great acclaim in the sold-out run.

This article uses material from the article Melba Moore from the free encyclopedia Wikipedia and it is licensed under the GNU Free Documentation License.