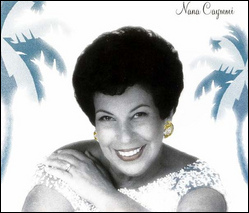 Caymmi was born in Rio de Janeiro, the daughter of Dorival Caymmi and Stella Maris. Her first appearance on record was on her father's album Acalanto. She married Venezuelan doctor Gilberto Aponte Paoli and moved there in 1959. She and her husband divorced in 1966, at which time she moved back to Rio. At this time she became involved with the Tropicalia movement; she became romantically involved with Gilberto Gil, whom she married in 1967 and divorced the year thereafter. In 1966 she sang "Saveiros" at the first Festival Internacional da Canção in Rio, and won first place in the national phase of the competition, despite boos from the crowd, who preferred Gal Costa's rendition of Gil's "Minha Senhora".[1]

Caymmi became a controversial figure, not at home in the Tropicalia scene nor in the protest song movement. Only marginally successful, she found work singing in Portuguese language nightclubs outside of Brazil in South America. In the 1980s, she recorded several albums for EMI, and appeared in the 1983 documentary Bahia de Todos os Sambas. In the 1990s she became more successful in the mainstream with her album Bolero, which was her first of several gold albums. In 1995 and 1998 she was named Best Female Singer of the Year by the APCA.[1] In 2010 French director Georges Gachot released a documentary film Rio Sonata about Nana Caymmi.

This article uses material from the article Nana Caymmi from the free encyclopedia Wikipedia and it is licensed under the GNU Free Documentation License.

On The Hills Heidi Happy
Update Required To play the media you will need to either update your browser to a recent version or update your Flash plugin.