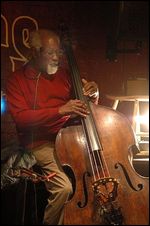 Coleridge George Emerson Goode (born 29 November 1914) is a former British Jamaican-born jazz bassist most noteworthy for his long collaboration with alto saxophonist Joe Harriott. Goode was a key figure in Harriott's innovatory jazz quintet throughout its eight-year existence as a regular unit (195865). Goode was also an important contributor to Harriott's later pioneer fusions of jazz and Indian music.

Goode was born in Kingston, Jamaica. His father was a choirmaster and organist who promoted classical choral music in Jamaica and his mother sang in the choir. As Goode recalls: "My name comes from my father putting on a performance of Samuel Coleridge Taylors Hiawathas Wedding Feast as a tribute to him.... I was born a year after."[1] Goode came to Britain in 1934 as a 19-year-old student at the Royal Technical College in Glasgow (later the University of Strathclyde), and then went on to read for a degree in engineering at Glasgow University. He was already proficient as an amateur classical violinist but turned to jazz and took up the bass after hearing the music of such stars as Count Basie, Duke Ellington, Billie Holiday and Louis Jordan. Abandoning his plans to return to Jamaica to work as an engineer, Goode decided to embark upon a musical career.

His primary early influences as a bassist have been Walter Page, Slam Stewart and Jimmy Blanton. Moving to London in 1942, Goode subsequently worked with Johnny Claes, Eric Winstone, Lauderic Caton and Dick Katz, became a founder member of the Ray Ellington Quartet and recorded with Django Reinhardt in 1946. Later Goode played in Tito Burns' sextet and led his own group. before being invited to join Harriott's new band in 1958. During the 1960s and 1970s Goode worked extensively with pianist/composer Michael Garrick. Goode was still performing in the house band at Laurie Morgan's Sunday jam sessions at the King's Head in Crouch End into his nineties.[2]

One of the finest jazz bassists who has worked in Europe, Goode is an important link to a proud heritage of Caribbean contributions to the music. His achievements through a long career have been an important inspiration for some leading contemporary black British jazz musicians. In 2002, his autobiography Bass Lines: A Life in Jazz, co-authored with his friend, the academic and jazz writer Roger Cotterrell, not only told his own story but provided poignant and vivid memories of the brilliant and tragic Harriott and of the birth of free form jazz in Britain.

On 18 May 2011 Goode was honoured with the Services to Jazz Award at the Parliamentary Jazz Awards, held at the House of Commons.[3]

This article uses material from the article Coleridge Goode from the free encyclopedia Wikipedia and it is licensed under the GNU Free Documentation License.